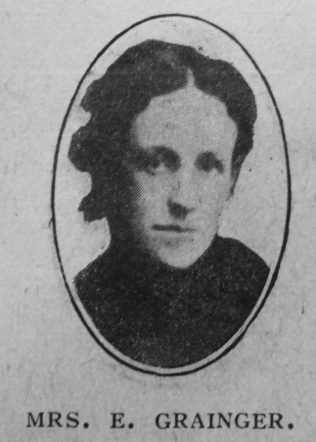 After many years of most painful affliction, Elizabeth Grainger, wife of the now sainted John A. Grainger, entered into rest on February 22nd, 1915.

She was the elder daughter of John and Margaret Parmley, of Middleton-in-Teesdale, an old Primitive Methodist family who were largely instrumental in the erection of the present Primitive Methodist Chapel in that town. In early life she was brought into contact with earnest Christian workers, and with great heartiness threw in her lot with them.

In the latter part of June, 1880, she became the wife of John A. Grainger, and, while health permitted, proved herself pre-eminently adapted for the position of a minister’s wife. Educated and thoroughly refined in all her contact with the people, she considerably helped her husband in the prosecution of his work. She was thoroughly trustworthy and conscientious. If anything, she was too. sensitive, and took to heart and troubled over little matters which would not have affected others.

During their residence in the St. Austell Circuit she was smitten with an affliction from which she never recovered. At times she and her family were hopeful that it was passing away, but that was not to be. For about fourteen years she was laid aside as an invalid, but bore her trial with Christian fortitude until the end came. To her was given one son and three daughters who had—especially the daughters, and during later years the younger of them, Miss Grace—the entire responsibility of managing the home. Great credit is due to her for the devotion with which she served her father during the later years of his ministry and during superannuation, until he joined his loved one on the 25th of February last.

Elizabeth was born in the summer of 1848 at Middleton in Teesdale, Co. Durham, to parents John, a joiner, and Margaret.

Elizabeth died in 1916 at Heacham, Norfolk.