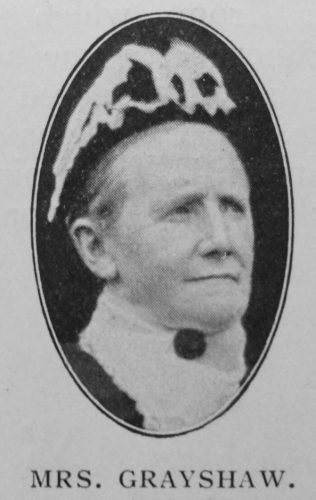 Transcription of obituary published in the Primitive Methodist Magazine by F.J.S.

Mrs. Elizabeth Grayshaw was 75 years of age when she died, November 26th, 1910. For fifty-four years she had been a member of the Connexion, and for forty-four years in connection with the Shipley Circuit. Born and brought up at Baildon, and in association with the Moravian Church, she became a Primitive Methodist on her marriage to James Grayshaw fifty-four years ago.

Her husband became class leader, local preacher, and circuit steward, and his wife was well known as one given to hospitality and to the fore in the support of the Church. An old-fashioned Primitive, the Class Meeting found in her a faithful member and a zealous advocate.

For two or three years she suffered from increasing infirmity, but was able (with intervals of absence) to attend the house of God up to the last. A woman of strongly-marked individuality, there were few who did not greatly respect her. Her three daughters are all members of their mother’s church, and are among the most valued workers that church possesses.

There was a very large company of sympathisers at the funeral, which took place at the Charlestown Cemetery on November 30th, and was conducted by the Rev. F.J. Sainty.

Elizabeth was born in 1835 at Baildon, Yorkshire, to parents John Hutton, a weaver, and Elizabeth Boocock. She was baptised on 16 October 1835 at St John the Evangelist, Baildon.

At the time of her marriage Elizabeth worked as a weaver.