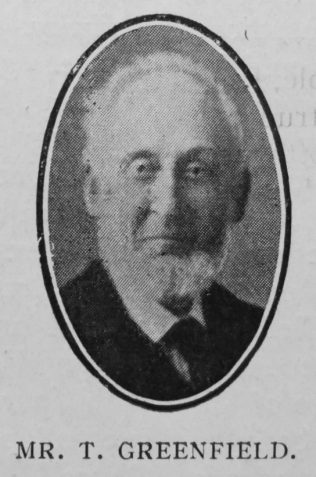 Transcription of obituary published in the Primitive Methodist Magazine S.G.D.

Mr. Thomas Greenfield, of Goole, passed away after a brief illness on March 6th. For sixty years he was a member of the Church, and during that time rendered much useful service as Leader, Local Preacher and Trust Secretary. Our brother’s knowledge of Connexional custom, and his gentlemanly bearing made him always a welcome member of business meetings. He dearly loved the “means of grace,” and his presence was an inspiration to the preacher.

Rev. C.T. Coulbeck writes: “When I was on the Circuit he was of great service to me—so wise in management, so willing in work and so faithful in all affairs.”

Mr. Greenfield lost his wife only a few months ago, and now, at the ripe age of 77, he has rejoined her in “the land of eternal day.” The funeral service was conducted by Rev. S. G. Delafield in the Dunhill Road Church on March 9th. Our brother’s faith was strong, and near the end he sang:— “I  know that my Redeemer lives.”

Thomas was born on 13 March 1835 at Swinefleet, Yorkshire, to parents George, who worked the land, and Ann.

He married Hannah Pickering (1835-1911) in the summer of 1860 at Goole, Yorkshire. Census returns identify four children.