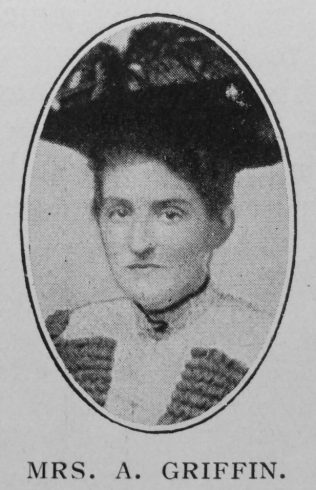 Mrs. Agnes Griffin, the beloved wife of Mr. Eli Griffin, steward of the Basingstoke circuit, passed to the homeland November 15th, 1910, at the age of 41 years. After several weeks’ illness she was taken to Winchester Hospital for an operation, by which it was discovered that a cancerous growth had taken too great a hold upon the body for the operation to be effectual. For nearly three months she bravely battled with the disease, enduring intense pain with great patience; ever considerate of others, anxious not to give unnecessary trouble, she was cheerful and hopeful to the end.

A Primitive Methodist of the third generation, she was deeply interested in the welfare of the Church and ever ready by gifts or service to promote its interests; very good also to the poor frequently helping those in distress or affliction. She was most helpful to her husband in business as well as an excellent housekeeper—cheerfully denying herself in order that her husband might take his work as a local preacher. As mother of six children she was thoughtful and industrious—counting no effort too great to promote their well being. The night before her death she desired to see them all and say good-bye, telling them she was going to be with Jesus, and urged them to be good and love Jesus. Very grateful for all kindness, and especially that of her sister-in-law, at whose house her last days were spent.

The funeral was most respectful. Part of the service was held in Sarum Hill Church, conducted by the Minister, assisted by Mr. J. Potter. Four local preachers acted as bearers, and a large company followed to the cemetery amidst every evidence of the deepest sympathy of the town for Mr. Griffin and the children in their irreparable loss.

Agnes was born abt1869 at Eddington, Berkshire, to parents John Hunt, a feeder of cattle and agricultural labourer (1871), and Eliza Reed.