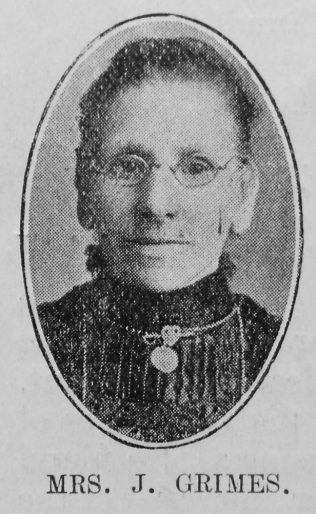 Transcription of Obituary published in the Primitive Methodist Magazine by R.H.

MRS. JAMES GRIMES was early associated with Primitive Methodism at Fincham, in Norfolk, and her mother’s home was ever open to the local and travelling preachers. She grew up with a strong religious sentiment which deepened into clear conviction.

Her marriage with Mr. Grimes, one of the Gilkes Street class leaders, was a happy one, and their children love the church of which their mother was a member twenty-seven years. She was a regular attendant at class and rarely absent from the Sunday services. A more self-sacrificing, patient, devoted Methodist member I have not met. Unaffected humility, real strength, unostentatious kindness and absolute sincerity in expression produced the impression in those who knew her worth, that her whole life was rooted in truth and love. Pretentiousness to her was an impossibility.

Her death came as a great surprise and shock to those who had not heard of her illness, which was of short duration, but borne with exemplary patience and a bright hope. The funeral was very largely attended, and an impressive service was held in the Gilkes Street Church conducted by the Rev. R. Heppenstall. She was interred in the Linthorpe Cemetery in the presence of a great number of friends.

Frances was born abt1848 at Fincham, Norfolk, to parents Richard, a blacksmith, and Mary. She was baptised on 11 June 1848 at Fincham.

Frances died in the spring of 1909 at Middlesbrough, Yorkshire.