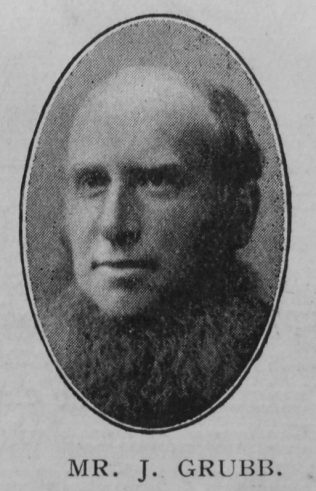 Transcription of obituary published in the Primitive Methodist Magazine by B.B.

John Grubb was born at Warton in Herefordshire on the 11th of March, 1847. He was residing at Malvern when Rev. Harvey Roe was the superintendent of Worcester Circuit, and during Mr. Roe’s ministry Mr. Grubb, who at that time was a member of the Church of England, experienced the new birth and joined our Church.

Mr. Grubb has been class leader and society steward, and sometimes conducted a service, but Sunday School work gave him the greatest delight. He was school secretary over twenty years, and worked for the salvation of the boys and girls. School anniversaries and outings were anticipated by him with childlike pleasure, and he entered into the innocent games with the scholars with the abandonment of youth. He was a strong man, and held to his opinions with tenacity; but could be led to change his mind when kindly shown sufficient reason for such change.

His occupation was that of head gardener, and he faithfully served his last employer seventeen years. He often won the best prizes at the annual flower shows. Last autumn he had a “seizure,” but gradually recovered sufficiently to attend to the oversight of the under-gardeners. On the 6th August he returned from his day’s work as usual. A few minutes after entering his home he passed away, and “was not, for God took him.” The writer conducted his funeral ceremony, our church being crowded, Miss Cox (his employer) and her household being among the mourners. On the following Sunday Mr. W. Williams preached a memorial sermon. He was much loved by his widow and sons and daughters, who mourn his departure.

John was born on 11 March 1847 at Wharton, nr. Leominster, Herefordshire, to parents Richard Grubb and Sarah Payn. His mother was widowed by the time of the 1851 census. John was baptised on 18 April 1847 at Leominster.