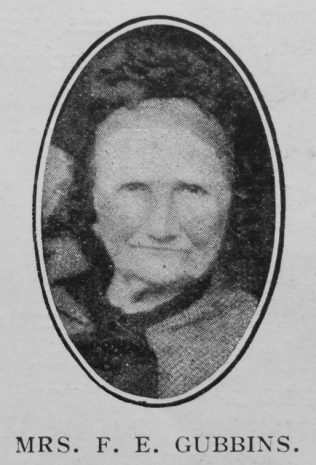 Transcription of obituary published in the Primitive Methodist Magazine by C.H.S.

In the quietude of God’s acre, in the parish of Priors Hardwick, South Warwickshire, on Oct. 6th, 1911, were laid to rest the mortal remains of the saintly Frances Elizabeth Gubbins. Born in an adjoining village in November, 1831, she received a good elementary education. Growing into womanhood, she manifested the possession of a strong character, a sweet disposition, and an indomitable will. She made many friends all through life, and was respected by all who knew her.

In 1852 she was married to Mr. Thomas Gubbins. Six years later they were both soundly converted to the Lord, and joined our society at Priors Hardwick. Their married life was one of concord and happiness. The passing of her husband after 55 years of happy union was a great trial to our friend, but she did not sorrow as one without hope. Her devotedness to our cause never flagged; the interest of her life was “the little chapel.” The end came peacefully on Oct. 2nd.

She was faithful unto death, and now she wears the crown of life.

Note: Online records identify that Frances was born in 1830 and married in late 1850, not 1852 as stated in the obituary.