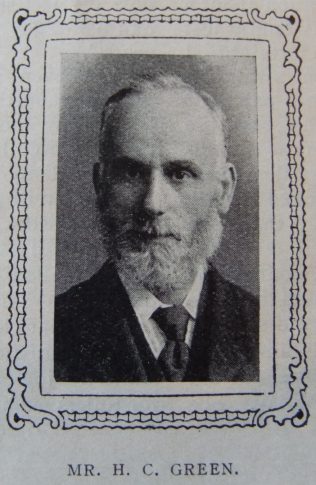 MR. HENRY COLSON GREEN has been Steward of Hurstbourne Society for over thirteen years. We are proud of him. Every good work finds in him a hearty sympathizer and supporter. It is the exception for him to be absent from any service or meeting held at our village chapel, but his interests are not limited to his own Society. A Methodist born and bred, he is ever ready to encourage the efforts of the smaller and weaker causes, and at the same time, the wide Connexional movements have for him their due weight of obligation. He has been for many years an active member of the District Committee.

In early life, Mr. Green had the advantage of extensive Foreign travel. It is to this in part that we owe the fine blending of open-mindedness with intense loyalty which makes him so valuable, both as comrade and leader. It will cause no surprise that along with grateful reverence for our veteran workers, he has a ready welcome for all new forms and phases of eternal Truth. He has a class-book and a class which meets weekly, and he is not scandalised by the newest attempts to explain the Gospel verities, however badly labelled they may be.

His neighbours regard for him is proved by his repeated election to the Parish Council, of which he is Chairman. He is also a School manager, and in this capacity has wielded much-needed influence in securing equity of treatment for Nonconformist children in the village school. Mr. Green has one son, who is now finishing a three years’ course at Cambridge.

It is difficult to imagine our friend as he will be when he has grown old. His affinities are with the things that time does not touch.

Henry was born in 1855 at Hurstbourne Tarrant, Hampshire, to parents George and Mary. George was a shop-keeper and farmer.