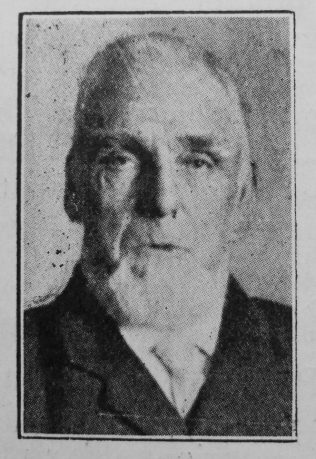 Mr. James Goodyear was a native of Hartlebury, near Malvern, where he was converted in early manhood through the agency of a godly clergyman. By trade he was a foreman builder, and his occupation caused his removal to Cheshire where he  superintended, after the lamentable fire, the re-erection of the mansion belonging to the Earl of Crewe.

Fox sixteen years he resided in the hamlet of Englesea Brook, the burial place of the venerable Hugh Bourne, where he joined the Primitive Methodist Church, and received his first ticket of membership in February, 1867. Shortly afterwards he became a devoted local preacher and Sunday School worker. For twelve years he was a lay preacher in Market Drayton Circuit, where he rendered valuable pulpit service. In the year 1894 Mr. Goodyear removed to Haslington, where he devotedly attached himself to the varied interests of the Church, Sabbath School, and Christian Endeavour.

He was a lovable man, and was held in the highest respect for his transparency of character and his genuine Christian life. His home was always open to the servants of the Lord, and they received a genuine welcome to his unstinted hospitality. His illness was intensely severe and prolonged. Throughout the long weary months of internal suffering he never murmured nor complained. He had a firm hold of the promises of God and always realised that Christ was with him. He died October 21, 1906.

His funeral was largely attended by official representatives from the Crewe, Sandbach, and neighbouring circuits. The remains were interred in the Haslington Primitive Methodist Burial Ground, the impressive service being conducted by the Rev. Albert A. Birchenough.

On Sunday, November 18th, a crowded In Memoriam service was held at Haslington, when Mr. George Jepson, of Chester, who had intimately known deceased for many years, bore suitable testimony to his humbleness of character, spirituality of life, and the valuable service he had rendered to the Church of God.

James was baptised on 12 August 1838 at Hartlebury, Worcestershire. His parents were Joseph, a bricklayer, and Sarah.

He married Esther Russell (1834-1905) in the summer of 1861 in the Droitwich Registration District, Worcestershire. Census returns identify six children.