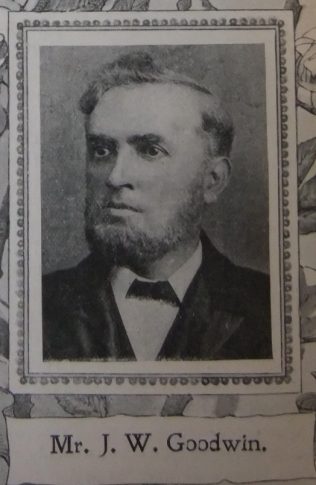 The position of Steward in the Tunstall Circuit has been held by Mr J.W. Goodwin for upwards of twenty-five years. Some time ago the circuit recognised his services by presenting him with a valuable gold watch. His business necessitates his being almost constantly away from home, but he seeks by correspondence to keep in touch with the various societies.

He is a local preacher and has considerable facility of expression. He has been appointed delegate to two District Meetings, and also to one Conference.

His wife is the daughter of the late Mr. Henry Binnell, a former Circuit Steward. He was a scholar of exceptional attainments and a prominent figure in the earlier history of Tunstall Primitive Methodism. They have given two sons to our ministry, one of whom is energetically pushing the interests of the Connexion in Glasgow.

John was born abt 1849 in Tunstall, Staffordshire to parents Thomas and Martha. Thomas was a potter.

At the time of the 1871 census John worked as a potter’s manager. He later became a commercial traveller.