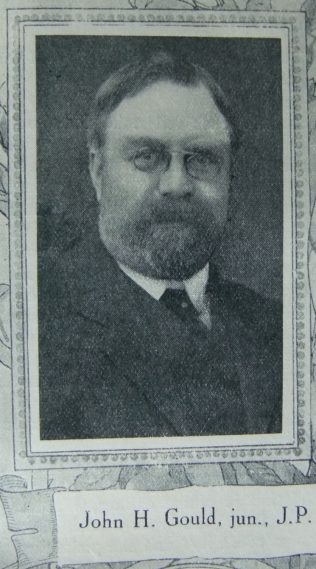 Mr. Gould shares the Chancellorship of the Silchester Circuit with his father, who has given nearly sixty years of fine service to our Church. Though still in his early prime his services within and without our Church are manifold and varied. He is a Trustee of ten trust estates, School Superintendent, Local preacher twenty-five years, Society Steward; has represented his brethren in District and Conferential Assemblies; served as President of the Reading Sunday School Union; was made a County J.P. in 1908 and is President both of Reading Temperance Society and band of Hope Union. He does merely hold an office, but “fills” it. He is splendidly loyal, modest and generous in a large degree, genial, hospitable, and places his business ability and acumen at the disposal of his brethren, always taking a keen interest in every department of Circuit life and activity; highly esteemed by all classes within and without the Churches.

John was born in 1864 at Englefield, Berkshire, to parents John Harrison Gould and Ann. John senior was a farmer and local preacher.

John married Elizabeth Parsons (1869-1927) in the spring of 1895 in the Bradfield Registration District, Berkshire. Census returns identify one child.