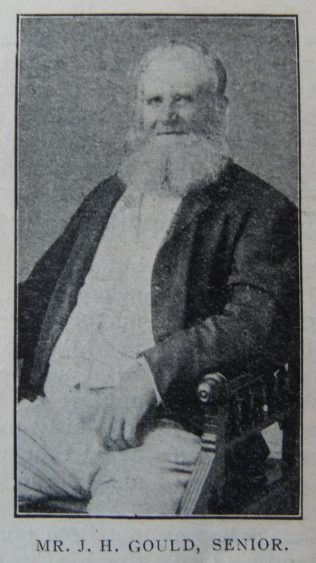 Transcription of ‘Sketch’ In the Christian Messenger by Rev. J. Walker

MR. GOULD is indeed “The Grand Old Man” of Silchester Circuit. He is one of the last of the older generation, which numbered among its workers in this particular neighbourhood several of outstanding ability. Converted at nineteen, he was in July, 1911, seventy-seven. Always religiously inclined, he threw himself enthusiastically into Christian work. He has been a member fifty-eight years; Class leader and local preacher fifty-four years; Society steward and Circuit chancellor forty years; S.S. superintendent; temperance worker over fifty years; is trustee of ten properties; has represented his brethren nine times in District and twice in Conferential Assemblies.

After spending some little time in the Reading Circuit, he returned to Silchester fifty-four years ago and soon afterwards settled at Mortimer (1866) where he has remained until now.

He felt strongly that “Drink” was antagonistic to Christ and became a total abstainer, though told by his brethren that “he would soon be in his grave.” He, however, persisted and established Temperance societies in every place in the Circuit, numbering in all 1,100 members; and this, too, in spite of the opposition and displeasure of his brethren, many of whom he lived to see active in the same work.

He was associated a good deal with the late W. Palmer, Esq., and G. Palmer, Esq.,of Reading, in Temperance and other Christian work, and had a large share in the establishment of the Reading and District Temperance Society, whose annual demonstration had an attendance of 5,000. Mr. Gould, too, was a constant associate of Isaac Nullis, accompanying him in some of his work. He also knew well Geo. Lamb, the Antliffs, the Kendalls, etc., while Thomas Penrose, Joseph Toulson, and many others were old friends.

He has taken a large share in the building up of the Circuit, helping ‘to mission most of the places where now we have churches, and a number of others where it has been impossible to secure land. During such activities six chapels were erected, one replaced, one enlarged. His intimacy with the Palmers and their confidence in him resulted in their giving land and generous donations for Circuit chapels, one society in particular benefitting to the extent of an acre of land and £150. Mr. Gould’s uncle gave the land and a donation towards the chapel at Mortimer, and Mr. Gould erected the building at a very low cost. Here to-day we have a very fine country church in every sense of the word, created and sustained humanly speaking very largely by Mr. Gould.

One of Mr. Gould’s finest gifts to the Circuit and church, is a son, Mr. J. H. Gould, J.P. who shares the Circuit chancellorship with him and continues the great and good work done, in manifold ways.

Mr. Gould is still in good health, and taking his share of Circuit work, his interest and attendance being undiminished. He continues to be in great demand for “specials” within and without the bounds of the station. He has conducted Sunday school anniversaries at Theale (Reading) for thirty-five years and this is but typical.

His good wife has shared all his beneficent interests and well supported him in his manifold labours, invariably accompanying him and displaying the keenest interest in all forms of Christian activity. They hope to celebrate their golden wedding next year.

The debt Primitive Methodism owes to such men is incalculable. Leadership counts for so much in Church life. Mr. Gould has given initiative to the work in Silchester Circuit, and also a strength and stability that have made all the difference between success and failure. While his work has extended far beyond the ordinary lines, as indicated above, he has made the progress of the station his first care.

John was born in 1834 at Mortimer, Berkshire, to parents Jophn Gould and Rachel Harrison. John, senior, was a carrier (1851).