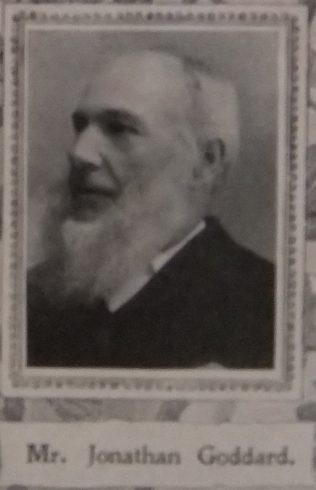 Mr Goddard has figured in the front rank of workers in the historic circuit of Faringdon in the Brinkworth and Swindon District for over fifty years. He has traversed its wide area at a great sacrifice often to himself. He has held all the important offices of the church, being Circuit Steward for twenty-five years, which office he now holds. He is also trustee for several chapels. He has played a prominent part in Sunday School work, and though over seventy years of age, he is still wonderfully active. His family also have benefited by his example and show a loyalty and love for the Church. One of them is the wife of the Rev. J.W. Fish. We pray that his life may long be spared to the family who love him and to the church that can ill spare him.

Jonathan was born in 1834 at Stanford in the Vale, Berkshire to parents Henry Goddard and Elizabeth Akers. In 1851, Henry was working as a brick kiln labourer.

Jonathan was converted at Cricklade, where he was serving an apprenticeship. As well as serving as Circuit Steward, Jonathan was a society steward, Sunday school superintendent and a local preacher for fifty-nine years. He served several times as delegate to Synod.

Jonathan earned his living as a shoemaker and later as a draper.