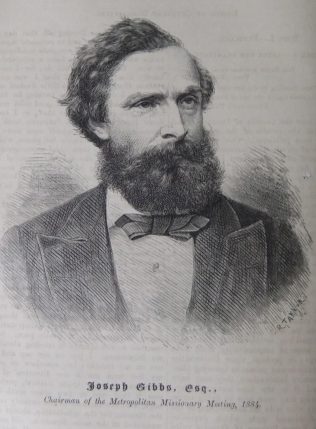 Joseph was born in 1842 in Northampton to parents George and Emma. George was a shoemaker.

As a young man, Joseph wandered, firstly to Stafford, later to Manchester and then back to Northampton. Joseph started his own business as a shoe manufacturer when his father moved to London.

Joseph visited America, but shortly after his return he contracted diabetes.

Joseph’s father put £500 on the foundation stone of the Kettering Rd Church in Northampton, but died shortly afterwards. The family kept a close association with that church.

Joseph was circuit steward of the Northampton ll circuit. He attended conference as a delegate on two occasions.

Joseph was Chair of Metropolitan Missionary Meeting in 1884.

Joseph was a connexional representative at the Methodist Ecumenical Conference in Washington in 1891.

Joseph was the District Treasurer for the Connexional Orphanage and, along with W P Hartley, Treasurer of the Primitive Methodist Chapel Aid Association.