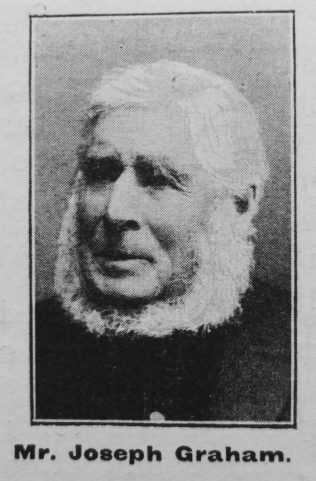 Transcription of Obituary in the Primitive Methodist Magazine by W.C. Trevelyan Parker

Joseph Graham whose parents were of Scottish descent, was born at Midridge, Co. Durham, on June 17th, 1807, where he lived until he removed to Darlington in 1882. He was the youngest of a family of six, and not being of the same strong build as his brothers, it was thought he would be unable to follow agricultural pursuits. He was accordingly kept, at school until nearly 17 years of age, and received a good education as things were then. As a youth he was industrious and thoughtful, and in no way countenanced the rather loose practices of the time. He was gifted with a sturdy character, and could say “No” and mean it. A year or so after his marriage, which took place in 1830, he returned to Midridge and commenced business on his own account. Here he remained, taking a leading and active part in all the concerns of the village and its neighbourhood, until his wife died in 1882, when he went to live with his daughters in Darlington.

Like many others who made no profession of religion, his parents would be supposed to belong to the Church of England. Joseph as a lad, was accustomed to take his place in the village church choir, and his talents in this direction earned for him the name of “the singing boy.” It was a passion that possessed him, and afterwards he exercised this gift by leading the singing of the hymns in the little meeting house at Midridge.

In his early years there was only one service, and that in the afternoon, at the village church. There was, however, a Wesleyan Methodist service in the village on the Sunday evenings, and the young churchman would often go there. He was evidently a boy who took a great deal of notice of things, and he was led to enquire “Why cannot the Church parson preach like the Methodist?” He had good reason to ask such a question, for he had not heard the Methodist preacher many times before his mind and heart were awakened to his condition as a sinner needing salvation. It was not, however, until after his return to Midridge as a married man that he definitely decided for Christ. Coming back to his native village he found that Mr. Thomas Burton, a Primitive Methodist local preacher, had established services there. This was in 1831, and in the next year Mr. Graham joined our Church. Under whose immediate preaching he was converted we do not know, but he said that he received his first class ticket from the Rev. Henry Hebbron, who was then engaged on the Darlington Circuit.

It was not very long before our late friend began to speak in public. It must be remembered that the Darlington Circuit then covered ground which is now divided between four circuits—Bishop Auckland, St. Helen’s Auckland, Shildon and Darlington. Remembering this, and what it meant in point of distances to the various preaching places, we get some idea of the intense earnestness and fidelity of Mr. Graham from the fact that the people, at village or town chapels, used to say “Joseph Graham’s planned to-day, we shall not be disappointed. If he is alive and well he will be here.” Long journeys were the rule in those days, and Joseph Graham never shirked the longest. At the opening of the Nelson St. Chapel, Newcastle, he walked, leaving home very early in the morning, to be present at the service, and then walked home again.

Mr. Graham’s house was a true home for the ministers, and many are those who have profited in body and soul under his hospitable roof. He never tired of speaking of those ministers with whom he had been associated. How his face used to brighten when he referred to men like James Watson, William Towler, John Day, Moses Lupton, Joseph Spoor, Robert Atkinson, John Lightfoot, Thomas Smith, Peter Clarke, Henry Phillips, Thomas Greenfield, William Clemitson, and Ralph Fenwick, who alone survives him! He delighted also in his association with William Graham and Hugh Gilmore, for both of whom he had a very special regard.

In the work of chapel building he was of course at home, and gave much time and labour and advice to extension in that way. He was a trustee of fourteen chapels, building several, and acting as architect for others. He was for a very long period a most respected and valued member of the District Committees, and attended several District Meetings and Conferences. He was a member of the Grimsby Conference in 1880, and his 73rd birthday occurred during its sittings; his co-delegates of the Sunderland district presented him with a handsome album containing the autographs of all those delegates, and the photographs of most.

As might be expected, he exercised a very powerful influence for good over the people of his native village. His neighbours seemed to regard what he said and did as settling the matter of right and wrong. He was most punctual and regular in attendance at the means of grace, and the writer cannot recall a single instance of his being late at the services. He also loved the class meeting and other meetings for communion and fellowship. He was well read in theology and church history, but his favourite book was the Bible. His Bible and the old hymn book, which had been used in the pulpit of the first meeting room at Midridge, always lay near his elbow.

Our deceased brother had a slight paralytic seizure about nine years before his death, and in the spring of 1899 he had a second stroke. On February 5th, 1900, the third stroke came, and from this he never rallied. During his fortnight’s illness he was visited by the writer, also by the Wesleyan Ministers, his old friend, Mr. William Richardson, and his class leader, Mr. W. Whitfield. Happily, he did not suffer much pain, and his mind was sufficiently clear to converse with his visitors and respond to their prayers. As the end drew near, he was often heard praying, and his daughters sang to him some of the old hymns to the old tunes he had sung with so much zest in the bygone years. He gradually sank into semi-consciousness, in which he lay until early in the morning of February 20th, when he passed away, surrounded by his daughters, whose devotion and care had so much to do with the cheer of his last years.

His remains were interred in the West Cemetery, Darlington, amid the sorrow of a great multitude of friends, the writer conducting the funeral, in which also the Revs. W.A. French  and C.J. Back (Wesleyan) took a part.

But Joseph Graham is not dead. He still lives! One who knew him well, writing to his daughters, said, “His presence was almost a sacrament to me;” and yet another wrote, “He was one of those men of whom it may be said that it would be well for the world if they might never die.” Of this we may be sure – his influence will never die.

Joseph was baptised on 19 July 1907 at Auckland St Andrew. His parents were John Graham, a labourer, and Mary Blair.