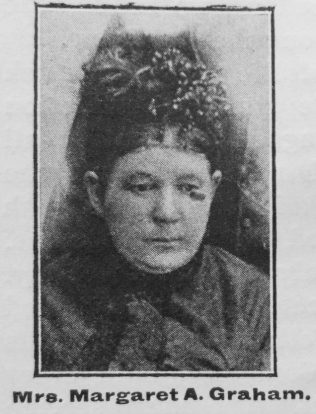 Transcription of Obituary in the Primitive Methodist Magazine by Emerson Phillipson

Margaret Ann Graham was born in Tunstal Lane, Sunderland, March 17th, 1834. Mr. and Mrs. Smith, her father and mother, were amongst the first-fruits gathered by Primitive Methodism on the Tyne. The father was by trade a market gardener. Both father and mother sought to rear the family in the fear of God, and with their daughter Mary Ann they were singularly successful. From her childhood she feared God and had a reverence for God’s people. The influence of her early training was distinctly with her during the whole of her life. In relating her Christian experience she was accustomed to say it was under the ministry of the Rev. J. Spoor, in the Flag Lane Chapel, Sunderland, that she yielded her life fully to God. She ever regarded that as the time of her conversion. She had now attained the age when she felt she must provide for herself, and help her parents to the extent of her ability. In the year 1849 she secured a situation at Crook Hall, near Consett, in the year 1855 she removed to Annfield Plain, and in 1857 was married to Mr. C. Graham. The marriage took place in the Colliery Church, Hare-law. It is well known that a period of trade depression was over the country, and many of the most industrious families were reduced to straitened circumstances. It was so with the newly-married couple, they felt it very much, but resolved to do right and trust in God, and often have they said, “God had led them by a way they had not known,” but it was right – they had ever found the promises true. Of a family of nine – seven sons and two daughters – only three sons survived the mother. The eldest, John, is a minister of the Church in America. He was formerly a local preacher in the Stanley Station, and was highly respected. The father has also held the position of local preacher for many years, and is held in the highest esteem by all who have had the privilege of knowing him. The home has been an open one for many years, in which ministers and local preachers have been entertained, and all testify to their exceeding kindness. On re-visiting the old place how we missed the kindly greeting of the one that has gone.

In the later years of life she was much afflicted, and for some time the affliction was thought of as being serious, but to all appearances she had recovered, and the family thought she might continue with them for years, but God thought otherwise. The end came suddenly and unexpectedly. On the 30th day of March, 1900, she departed this life, and on the following Sunday was buried in Hare-law Cemetery, amid every sign of love and respect. The burial service was conducted by the late Rev. D. Kyles. Yes, life is poorer by reason of this separation, but Heaven is richer. She has gained her rest; we must not deplore her.
“God was her Ransom, her Guardian, her Guide;
He gave her, He took her, and He will restore her.
And death has no sting, for the Saviour has died.”

Peace be to her memory.

“Sleep thy last sleep,
Free from care and sorrow.
Rest where none weep
Till the eternal morrow.”

Margaret married Christopher Graham (abt1830-1908), a coal miner, in the spring of 1857 in the Durham Registration District. Census returns identify five of nine children.