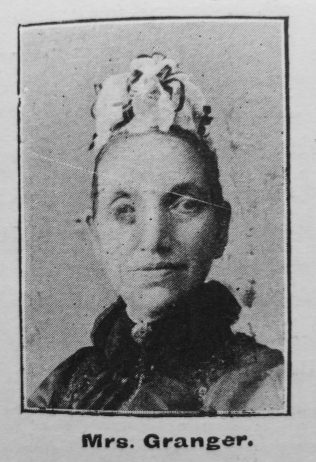 Transcription of Obituary in the Primitive Methodist Magazine by S.S. Henshaw

Mrs. Granger was born at Hathersage, Derbyshire, June 16th, 1836, and peacefully breathed her spirit into the hands of God on April 4th, 1903, at the Lindens, Barnard Castle. She was the youngest daughter of William and Hannah Moore, who were strict adherents of the State Church. They trained her to be loyal to their faith. In due time she was confirmed. But there was a hunger in her heart that the ministration of the State Church did not satisfy, and  when nearing her eighteenth year she was converted in the Wesleyan Chapel at Melbourne in her native county, under a sermon preached by the Rev John Rhodes. Her conversion meant consecration to Christ, and henceforth she was an earnest devoted disciple. She joined the Wesleyan Church, but a few years later on removing to Derby with the rest of her family, she became a Primitive Methodist, identifying herself with our people at Kedleston Street Church, and here in July 1868, she was married to the Rev. Thomas Granger, and for nearly 38 years she shared with him the sorrows and joys, the trials and triumphs, the privations and pleasures of a minister’s life. They travelled together in the following Circuits: Derby, Chesterfield, Rotherham, Buxton, Lincoln I., Nottingham I. and II., Scarborough, New Wandsworth, Hull I., and Barnard Castle.

No man ever had a more sympathetic wife, no minister a truer help-meet. She was indeed as the Rev. J. Ferguson, D.D., described her in a letter of condolence to Mr. Granger, “a gift of God.”

She was a most loving and devoted mother. Her children along with her husband were her first care, her chief charge. She sought to found their character on faith in Christ and to build up their life in the strength and beauty of holiness.

Her piety was of a high, pure, practical kind; though not loudly demonstrative, it was yet deep and fervent. She was not accustomed to make public appearances, but she steadily and quietly performed her task and pursued the path of duty. All the churches over which her husband presided benefited by her work.

She carefully nourished and cultivated the spiritual life. She loved the house of God, the means of grace and private prayer. Christ was to her a present, constant, all-sufficient Saviour.

She was marked by her gentleness, her tranquil disposition, her kindly heart and generous temperament; the poor found in her a friend, the sick received her benefactions, and the children secured from her a smile of recognition and a suitable word of encouragement. She was exceedingly hospitable and delighted to have ministers and others as her guests.

In her last days she displayed the same faith, hope, love, patience, submission that had characterised her throughout her whole career. When growing very feeble, she gave her husband the assurance that she was “resting in the Lord,” and added, “the Lord will do the best for you and for me.”

The end was perfectly peaceful, she gently fell asleep to awake in the life and likeness of her Lord.

The esteem and affection in which she was held were shown in the numerous letters received by her husband and family, bearing testimony to the excellence and influence of her character and work. A large procession of friends followed her remains to Barnard Castle Station, whence they were taken to Scarborough and laid to rest in the cemetery of that town; an impressive service was previously held in Jubilee Chapel, Rev. B. Fell giving an appropriate address, and full final service at the grave. An “In Memoriam” Service was conducted in our Newgate Church, Barnard Castle, by the Rev. A. Latimer, who preached to a large congregation an able and eloquent discourse, based on John 14, 1-3. May husband, children, friends, follow her as she followed Christ, and finally be gathered with her and the whole household of faith to the home above.