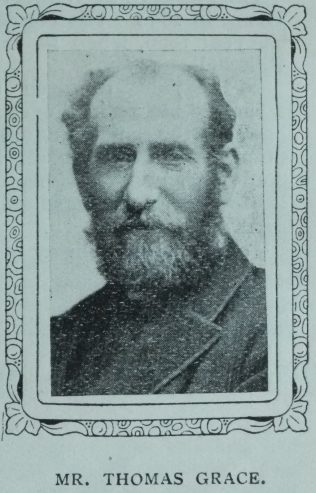 Mr. Grace, born in 1843, became a scholar in our St Mary Street Sunday School in 1856, a member of the Church in 1857 and a local preacher in 1859. In 1861 he went to the Brinkworth Circuit and laboured as a travelling preacher for a year. His father’s illness was the chief cause of his return home, and in ten months, by his father’s death he was left in charge of one of the largest smithing businesses in Hampshire.

Mr. Grace has not been anxious to make money, but, believing in his call to preach the Gospel, has studied hard to prove himself a workman needing not to be ashamed. His services have been sought by other churches, but his own Circuit always had the first claim. He has always taken a deep interest in the work of the Circuit, regularly attending the quarterly meetings, and for over twenty years was Circuit Steward. The district also has recognised his worth and work, and sent him on three occasions as one of its representatives to Conference, and elected him for thirteen years in succession as District Missionary Treasurer.

Having signed the pledge when a lad, he has been an ardent worker in the Temperance cause, enjoyed the personal friendship of Archbishop Wilberforce, during his residence in Southampton, and frequently took part in his temperance meetings.

Loyal to his Church, generous in supporting her funds, hospitable to her ministers, of whom he speaks in the highest terms, and kindhearted to any in distress, he is deservedly held in high esteem wherever known.

Thomas was born in 1843 at Southampton, Hampshire, to parents William and Emma. William was a ship smith. Thomas took over his father’s business.