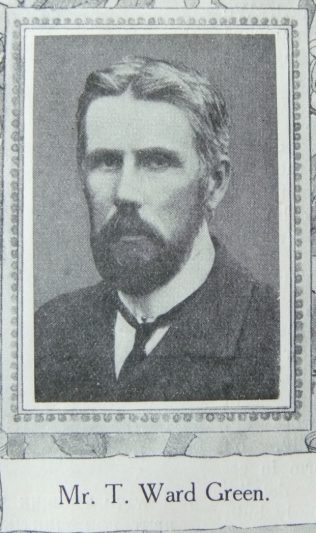 The Senior Chancellor of the Llanymynech Circuit, T. Ward Green, is a Primitive of the third generation. His grandfather was the steward of the Oswestry Circuit, and his uncle, S. Ward, of “The Wood,” to whose estate he succeeded, was the first steward of the Llanymynech Circuit. The Circuit consists of a number of small chapels, with a poor people, and it speaks well for Mr. Green’s chancellorship that it has never had a balance due since his accession to office. He is a J.P., a C.C., a chairman of Liberal Association, and yet never neglects a week-night service, whether prayer meeting or class meeting. He is District Missionary Treasurer, and his services as a preacher are in earnest request throughout the county. He is also an ardent Temperance worker. He is superintendent of the Sunday School, and a leader of a society class. He is still young, and the best is to be.

Thomas was born in 1863 at Knockin, Shropshire, to parents Thomas and Anne. Thomas, senior, was a farmer.

Thomas lived on his father’s farm until he inherited “The Wood” at Maesbrook, Shropshire. He worked on the farm.

Thomas died on 19 September 1950 at The Wood, Maesbrook, Shropshire.