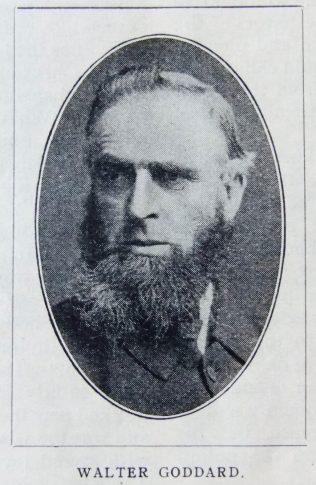 “There was a jolly miller who lived by the Dee.
And his eye was as happy and blithe as could be.”

WALTER GODDARD did not live by the famous river that winds past Chester City and Eaton Hall, but in the less famous village of Outwell, just on the Ouse, in the fen country that lies between Wisbech and Downham Market.  His was not a watermill, though it stood in the midst of an aqueous district, but one of those high tower windmills which were so conspicuous along the country-side in the past, and which are unfortunately falling into disuse to-day through the application of steam and the complicated machinery necessary to the production of the snow-white flour desired by our modern housekeepers. There was no roller flour in those days, but stones ground the farmer’s wheat as they brought the produce of the rich fen-lands to Walter Goddard’s mill, and took it back again ground and separated to supply flour for the home and bran for the stock.

Walter Goddard was an outstanding figure in the district, as well known in the market as in the pulpit, in the farmsteads of the people as in the ministry of the Word. He rendered fine service to the scattered population of the fens by the proclamation of the Gospel, and to our own church by wise, administrative counsels in the local courts of the district.

He was a fine specimen of manhood—tall, well-built, with sinews like whip-cord and limbs like an athlete. His features were bold and distinct, his eyes sharp as an eagle’s. He had the penetrative glance that seemed as though he could look one through. He had the commanding manner—voice, gesture, will. On first acquaintance he would strike one as stern and sharp. No one would think of playing pranks with this man, but when you got to know him you soon discovered that he had the heart of a little child and the warmth and tenderness of a great soul.

His voice was musical and strong—never a good singer, but a great speaker. He could manage the largest crowd and hold the attention of the roughest audience. And what audiences he had! Never a Camp Meeting within reach but Walter Goddard was requisitioned for the work. He was a good preacher, and knew how to present the truth to men. In the regular Sabbath ministry in cottage or chapel he was effective, but if you wanted to see him at his best go to the Camp Meeting. There he more than held his own. See him as he stands in the waggon, with stem face and flowing locks, keenly eyeing his audience and getting ready for the charge! And then, with some great text—none of your narrow, catchy texts for these warrior souls-but with a great text full of Gospel truth he would launch into the deep, and swaying from one side to the other of his ample pulpit, he would soon win the crowds and master them by the power of his appeal. He was a born leader of men, and knew how to appeal and convince.

In the Norfolk villages in those days books were not widely read, but Mr. Goddard read much in Methodist theology and Methodist biography. The magazines were the staple food of many, and provided sound reading for the village home. The chapters of Garner’s theology, or Antliff’s disquisitions, or Greenfield’s discourses, were eagerly read, and pondered, and used. Tell it not in Gath! Some were reproduced in village pulpits to the spiritual edification of the hearers. What prodigies of learning the intelligent, thoughtful, reading local preacher appeared to his hearers! He was head and shoulders above his companions, and they marvelled as they heard him speak. “ Did you hear Walter last Sunday?“ man would say to man as they toiled on their farms during the week. “It was wonderful. Wherever does he get it all? He seems to know the Book through and through! ” And know the Book he did. He had no fanciful theories or interpretation of Daniel or Revelation. He had no time for the little horn or the mystic liquors. But he knew the Book—at least, he knew the great evangelical message contained therein, and loved to declare it Sabbath by Sabbath. He knew what it was to lead men to the Lamb of God which taketh away the sin of the world. Sometimes he would plead with womanly tenderness, but at other times he would strike the sterner note. He knew the terrors of the law, and with stentorian voice and piercing eye and vigorous action he would call men to repent, and warn them to ?ee from the wrath to come, until with fear and trembling they found their way to Jesus.

The Downham station in those days had some outstanding men in its official staff – Anthony Proctor, Bensley Redhead, Wm. Rose, H. Theobald, C. Leflay: but amongst these peers of Primitive Methodism Walter Goddard stood a peer amongst peers. It is said that royal blood flowed in his veins, but whether so or not he was a kingly man, and all his gifts were consecrated to the highest service. Wise in council, sane in deliberative assemblies, he was greater still in evangelistic fervour and zeal. He was frequently sent to District Meeting and Conference, but his thrones were the platform and the pulpit, indoors or out.

No pen has ever yet recorded what Primitive Methodism has done for the scattered fen population of East Anglia. Even the ordered provision which the Anglican Church has made for established villages failed to reach the isolated dwellers in the fens. They were few and far between. They did not exactly come under the orderly parish system. Often they were miles away from their parish church and never attended its services. Primitive Methodism—or, at least, its virile sons in East Anglia—saw an opportunity, and finely used it. They measured no journeys, counted no miles, did not even reckon up their congregations, but saw the opportunity of proclaiming the Divine Evangel to lonely men, and forth they went. They were quite content to travel many miles across lonely fens if they could but persuade men to become reconciled to God.

And what journeys they were! – long, weary, difficult. Roads? Well, where there were any they were like Daniel Quorm’s pilchards—“only middling.” No modern cyclist would ever think of riding on them. But in many cases there were no roads at all, only the river bank or the footpath across the fens, with a single plank across the dykes. The very names indicate the type of journey – Lakes End, Marshland Fen, Brandon Creek, Three Holes, Hundred Feet Bank, Ten Mile Bank – names suggestive of water, mud and fen. Yet in these places flourishing churches have been formed by the self denying efforts of men like Walter Goddard. Far distant and difficult as the journey might be, the preacher went to his appointment, and in cottage or farm or chapel proclaim the message of grace to men. What services they were! They might not altogether meet the fastidious tastes of aesthetic minds, but they were the means of saving souls and making men.

It was New Year’s Eve. Away yonder in the fen a Watch-night service was being held In a lonely farmhouse. But the people had gathered for worship. They sang – ah! Those songs of Zion!—they sang until the rhythm swayed the body. And presently they began to step in rhythmic order, and “danced before the Lord.” The superintendent minister, a staid, saintly soul, wondered at the sight. But he knew the men – devout, saintly, good – and was too wise to stop them. They danced with sacred joy until completely exhausted. A stricter or more regular service would not have met the needs of these dwellers in the lowlands. Religion – their religion, at least – had its seat in emotion. What they had seen and felt with confidence they told. They needed something they could feel, something that was a real experience, and in the free, unconventional service of cottage Methodism they found what they needed.

But to meet this need the preachers must travel long distances. The man who could drive his own horse was an invaluable asset to the circuit in those days, as now. “Have you any converted horses on this circuit?” asked an elderly minister of a young probationer. “Converted horses! Oh, yes; we cannot do without them.” Walter Goddard had a truly “converted horse.” It was a real travelling preacher, planned like its master, and not only carried its owner to his appointments, but others, too. Ministers and local preachers knew the value of that horse. They were glorious days—days of delightful comradeship, days when master and man rode together on the same errand, days when preachers waited for each other at the corner of lonely country roads, and asked as their first question, “Well, how many tonight? ”— not how many were present at the service, but how many were saved. Oh, the joy of riding behind that horse! It should have carried me to Lynn Market, but it never did. For hours I have stood upon that horse-block just outside the kitchen door under the promise that if I said “Lynn” correctly I should go to Lynn Market. But I never got there. That wretched “L” was always a stumbling-block. It never would come right, and will not now. But if it never carried me to Lynn Market, it carried many a preacher on a more important mission.

And that pond just outside the gate, where we as boys delighted to paddle, until by one mistaken step we plunged into the deeper parts over head and ears with clothes on! And then, “To bed you go, whilst your clothes get dry!” And that mill in the yard, with its wondrous rope haulage, up which the sacks of corn were supposed to go, but up which we boys would occasionally ascend, until we got into dangerous regions above!

It was the preacher’s home. They were the days of the circuit round, and when a paterfamilias was on the round, his wife and children were as welcome in that home as any prince could be. And what a home it was – kind, hospitable, religious! It was the old regime, but it was not to be despised, or even compared with modern habits and methods. It was the regime that made East Anglican Primitive Methodism what it is to-day. It produced strong, devout, vigorous men – men who hazarded their all for the cause they loved so well.

Dark days came to Walter Goddard – the days of agricultural depression and change. They smote him hard. But he never lost his faith or courage or zeal or love. His power to render the same measure of service was gone, but to the end he lived to adorn the Gospel of Christ and proclaim the message of His grace to men. He belonged to that fine race of men who, by self-denying effort, liberality, and service, have helped to make Primitive Methodism in East Anglia a great and mighty power.

Walter was born abt 1832 at Parson Drove, nr Wisbech, to parents John and Mary. John was a wheelwright.

Although Walter worked as a miller, the 1881 and later census returns describe him as a farmer.