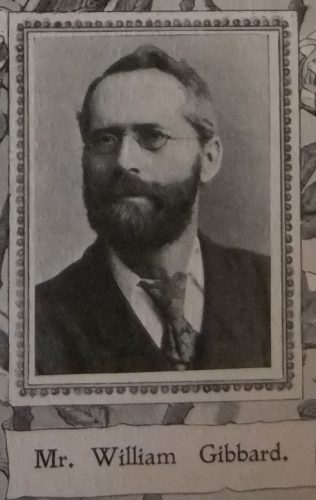 Estimated by the number of its places, Lynn is the largest circuit in the United Kingdom, and requires a Chancellor at once clear-headed and warm-hearted. In Mr Gibbard it possesses such a man. In 1873 he connected himself with Primitive Methodism, but removing to a neighbourhood where we had no society his connection was broken. He became a local preacher on the Chelmsford Station in 1880, and came to Lynn in 1896. From the first of his coming here he has been a most acceptable local preacher. Unanimously appointed to the Circuit Stewardship he has repaid his brethren by loyal, conscientious, and painstaking service. His family is closely associated with our cause, and his son-in-law, Rev. T.H. Barlow, is in our ministry. Under his guidance we trust that the station will witness much progress and that his ideals may be grandly realised.

William was born in 1856 at Hatfield, Hertfordshire, to parents Robert and Julia. Robert worked the land.

William worked as a railway bookstall clerk in Chelmsford, becoming clerk-in-charge before moving to Kings Lynn to undertake the same work.