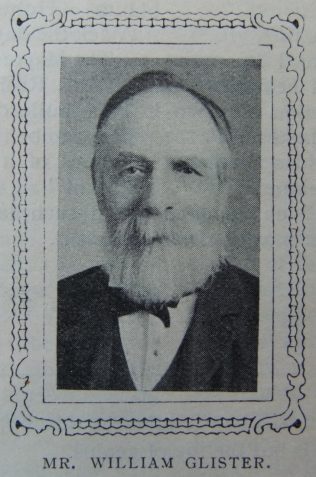 MR. WILLIAM GLISTER, one of the oldest officials and Class leaders in the Beverley Circuit, is a Norfolk man. He came to the East Riding when a youth and identified himself with the Wednesday Market Society. Born in 1834, he has passed the allotted span of human life, but his interest in all good work is as keen as ever. He came on the Preachers’ Plan in 1876, and has given full proof of his ministry.

For fourteen years he was the teacher of the Young Men’s Bible Class. He has been a Class leader for thirty-eight years, and at one time had charge of two classes with over a hundred members. His present class contains fifty-three members. He knows how to lead the people near to the heart of God. He carries into the Class meeting an unction of goodness and a ripe experience that create an atmosphere favourable to the growth of the Christian life. He has been superintendent of the Sunday school and no man filled that office with better grace than our dear brother. His exemplary piety and godly counsel have left its mark upon his family, for all his sons and daughters are members of our Church. His eldest son, George, is now the superintendent of the Sunday school, while the younger son, Charles, is secretary of the C.E. Society. In all his good work he has been ably seconded by his excellent wife.

Our dear friend has borne the burden and heat of the day under the strain of many toils and hardships endured with quiet confidence and patience. Though somewhat feeble on account of growing years and sickness, he yet preserves a cheerful spirit and a holy courage. We pray for him that a few more years may be added to his life and that the closing days may be full of sweetness and light.

William was baptised on 30 September 1838 at Calthorpe, Norfolk. Only his mother Anne is identified on the baptism record. William’s married record identifies his father as John Glister, a joiner.