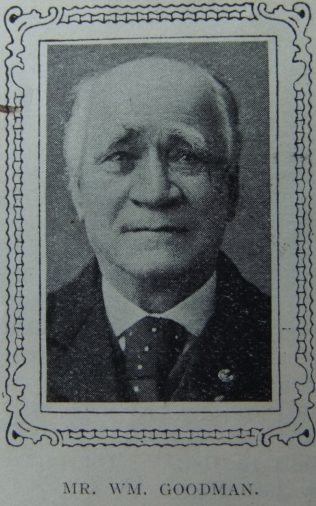 “DADDY” GOODMAN as he is familiarly known, was born in Norfolk in 1835. When the Crimean War began he joined the Navy and was sent out in the “Appollo,” to the War. He was engaged in the Greenhill Battery, Sebastopol, for which he received the medal and clasp and also the Turkish medal for the Crimea. In 1857 he was sent to China where he was severely wounded in the leg and received his Canton medal and clasp. He was invalided home in 1868, but it was not until some four years later, impressed by an open-air service he decided for Christ. Ever since that time he has been an ardent and consistent worker in the Canterbury Church. He has quite a mile to travel to Church, but he eagerly attends twice every Sabbath. When there is a “special” in the afternoon he is there and stays in the Church alone (or as he puts it  “with my Father”) until the evening service. Mr. Goodman is on the plan as a prayer leader and never were the duties of such an appointment more faithfully done. He is always ready to give the prayer meeting a “lead” and prays as though he were conversing with a well-known friend. As a class-leader he has been most attentive to his responsibilities and has shepherded his flock to the best of his powers. His message is one of cheerfulness for he believes that, “all things work together for good to them that love God” and his favourite hymn is, “In some way or other, the Lord will provide.”

One of the great events of the year for him is the Harvest Festival for which he has a collecting book. Last year he beat all previous records by handing in the very handsome sum of £10 10s.

His devotion, his religion of smiles and his consistent Christian life have won for him the love of the Church.

On returning from China, William worked as a bricklayer’s labourer and later went into business as an oil and hardware merchant.