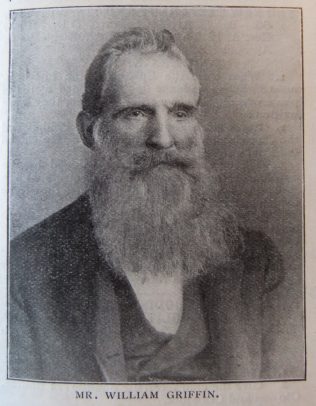 MR. GRIFFIN, of Cradley, in the Cradley Heath Circuit, is one of the few remaining representatives of the ideals of early Primitive Methodism. The traditions of the past are precious to him. As he is now in his eightieth year, and has had an experience extending over sixty years, he is able to compare the past with the present. His conviction is that the early methods and enthusiasms, cannot be surpassed by any broad and comprehensive schemes such as we hear of to-day. He contends that the spiritual needs of men are the same to-day as in the past, and that the primary work must ever be the conversion of men and women by the preaching of the Gospel of the Cross. Our friend has no complaint to make concerning the ideals of our Church to-day; he agrees that our ideals remain the same. There is a danger, however, that the broadening tendency may have a weakening effect upon the Churches. Mr. Griffin, therefore, is not slow to warn the preachers and to insist upon emphatic and clear preaching of the Cross. Some people might label the counsels of our friend as “old-fashioned,” but those who know him best and have witnessed his work in our Church do not believe it. The complex organisations of our Church to-day receive his best thought, and if it must be that our ideals are to be broadened, then he would say, “ Let us have height as well as breadth.” The zeal of our friend is the zeal of the apostles.

Mr. Griffin has been a member of our Church for sixty-four years and a local preacher for sixty years. Increasing infirmities, however, have stayed his hand. He has suffered a great deal of late years with nervous depression, but whenever he feels better in health there is a return of the eager spirit of service. His work at Cradley will remain a witness to his courage and integrity. It was by his undaunted faith that our Church was lifted out of the deeps. He and his beloved wife – who died two years ago – laboured with great patience and industry, and finally succeeded in relieving the property of its financial burden. They were loyal to Primitive Methodism, and inspired others to work and labour until the victory was won.

Another characteristic feature of Mr. Griffin’s life is his love of our ministers. His home has always been open for them and nothing gives him greater joy than a visit of the ministers. He enjoys a joke, and in a humorous way compares modern preachers with the pioneers, and when the account is balanced it is found that there is substantial balance in our favour. In a certain sense that is to be expected, for he has a son in our ministry who is well known for his gifts in preaching and administration. He is at present superintendent of the Burslem Circuit, and has just accepted an invitation to remain in the Circuit a sixth year. He entered our ministry in 1875, and he is never slow to confess that his mother was his teacher in the highest things of life. She ordained him for the ministry the day that he was born. It was an ordination of the best kind, inasmuch as the ideal of preaching was so vividly set before the youthful aspirant that since he entered the ministry preaching has been the passion of his life.

We cannot expect our brother to have many more years to abide with us; his day’s work is done, the gold is in his sky, and the setting sun lingers to cast his softened light upon him. But in the quiet and restful retreat of his hospitable home, he is still watching and praying, and we assure him of the happy morning that will welcome him by-and-bye. We could wish him many years yet, if it is

God’s will, that he might minister to our hearts in kindly words of sympathy and encouragement. We rejoice in his long life of obedient submission to God’s will, and the memory of it makes us “thank God and take courage.”

His obituary records that whilst at Bewdley as a blacksmith’s apprentice, he became a Wesleyan local preacher. When twenty-one, he removed to Cradley and commenced business as a shacklemaker.