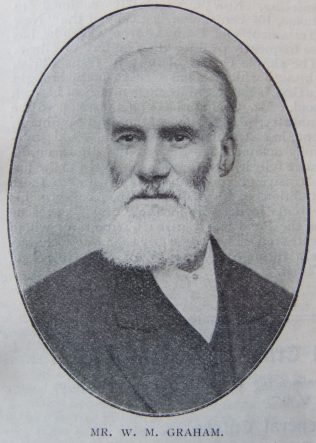 One may still meet here and there in Sheffield veterans who were associated with “bethel” in the days of its glory, when “Coal-pit Lane” was a synonym for the fiery evangelism that aimed at saving the worst, and could not live unless the stone floor below the pulpit was often wet with the tears of strong men crying for mercy. The number gradually grows less, and those that remain bear the scars of battle and need the help of their staff. Among them is Mr. William M. Graham. He became a member forty-five years ago, and within three months of joining the society received from the Rev. W. Cutts  a note to accompany preachers to their appointments. He never took a prominent part in the business life of the Church, his calling from the first being that of a preacher and evangelist. His subsequent work as a city missionary precluded holding an office during the years of maturity and strength.

He was a pioneer of the Connexion in several parts of Sheffield and district. He shared the labour – and persecution, too – in laying the foundations of the cause at Hoyle Street and other churches on that side of the city. With John Nutton, Henry Adams, who led the singing, and others now gone to their reward, he lent a hand in establishing the mission in Hereford Street, from which the town Churches of the fifth, eighth and ninth Circuits have sprung. Some of his most interesting reminiscences are associated with the missioning of Derbyshire villages, and notably Dore. When father and son were walking to an appointment at Dore one Sunday afternoon, suddenly the elder stopped and pointed to a spot under a big tree standing in a green lane. “See lad,” he said, “that’s where Dore was won.” Dore was won in the face of persistent opposition and callous indifference that denied men shelter while they ate their humble fare on even wet and stormy days. These men of God, therefore, before attacking the almost impregnable fortress, knelt down under this tree to plead for Dore until the Holy Spirit fell upon them, and they were consciously clothed with the power of God. Such men were bound to conquer. Mr. Graham was one of the youngest of the band. Something of his personal character and not a little of his success in winning souls must be due to training in this kind of work under the tutorship of such enterprising and able leaders as Daniel Needham, Sam Kirk, and “Sammy Silvester.”

Mr. Graham’s name stands at the head of the list of local preachers on the plan of the fifth Circuit. In connection with the Church at John Street, and previously at Bethel, he has been in membership since he left his village home at Thorne, in Lincolnshire, for the larger life of the city. As will appear directly, his daily work has brought him into close association with other Churches, and to a considerable extent limited his opportunity for service in his own, but he never flinched in his loyalty nor failed to respond to the Church’s call when he could serve. He was happy in the pulpits of his own Church. It was home to be occasionally away from the slums and neutral hymns and nondescript buildings, and to worship or preach among his own spiritual kith and kin.

But Mr. Graham is best known as a city missionary. As he is now in retirement, we must refer to this side of his work in the past tense. For thirty-two years he has been the agent of the Sheffield City Mission, and as such has been the minister of the poor, the sick, the degraded and the morally and spiritually neglected of humanity. Judging by the appointments made, the Mission seems to have a preference for men trained in Methodism, and Primitive Methodism in particular. A characteristic stiry is told of Mr. Graham’s interview with the committee of selection. “Can you sing?” he was asked. “A little,” he replied – “simple things, like ‘Turn to the Lord and seek salvation.’” The appointment meant relinquishing prospects a man with a family cannot ignore, and taking up work more exacting and arduous than the writer has met within any part of the Lord’s vineyard; but the call was clearly of God, and that conviction has never weakened. In this work he found a valuable helper in his wife, who herself, as the daughter of the Rev. John Hirst, had had an early and thorough initiation into open-air and other evangelistic forms of Christian activity. They have been frequently described as “Moody and Sankey.” The singing partner could always gather a crowd by a solo, then the preacher would mount the improvised rostrum and tell the old, old story of the Cross.

The city missionaries visit hospitals, workhouses, cabstands, and undertake other work that does not readily fall within the sphere of the Churches; but they are principally employed in visiting the neglected districts, holding meetings in yards and cottages, and taking services in mission-halls. While Mr. Graham has laboured in various parts of the city, his name will ever be most closely associated with a well-known locality called Pond Hill. When he first went, Pond Hill was an enclosed area of slums equal to anything in London. Policement went in pairs, and then did not go very far. Dirt, drink, and darkness reigned, – literal as well as moral darkness. On many an expedition it was necessary to take matches and candle to get among the tenements, which were let off in furnished rooms. For a time it was impossible to gain access to the people. Every door was fast against him. When he noticed that the doors banged one after another as he entered a yard he guessed the reason. The tenants though he was a bailiff! One women brazenly declared through a window that he was a “wicked old imposter,” his tracts a blind, and his Bible a make-believe! But what triumphs of grace were won in this unpromising neighbourhood!

Was there danger to limb and life while moving in such a neighbourhood? Apparently a great deal, for the devil raged at times. Really, he was quite safe – at least, he always believed he was. A blatant infidel publicly declared that, if the missionary ever went into his house he would “kick him out.” When the infidel’s wife fell sick he did get in, and she became a saved woman. Soon after the path into eternity of a consumptive daughter was illumined through his ministry. The man stormed, as the lions may have roared at the sight of Daniel, but he had no power. The man of God passed unharmed. Eventually the man himself became a humble and faithful follower of Jesus Christ. The missionary was safe enough among those people after a few years of service. Moving among them as one that served, seeking only their good, they came to respect and trust him. When an alien has been inclined to disturb, the rough, burly natives, in their blunt way, have plainly intimated that no one was to touch “that man,” as they put it.

In Wesley’s phrase Mr. Graham has had “nothing to do but to save souls.” But a saved soul means a restored life. In one case it means a marriage of those living in sin, in another the return to home and friends of a fallen daughter, and in many others the provision of food for the starving, and a helping hand back to independence. The last time I was in the city with Mr. Graham he pointed out the premises of a prosperous business man and told me that the business was the outcome of a small beginning the man had made with a few coppers given him just when the new impulse came into his life. The incident was a part of the story of the early days of Pond Hill to which I had been listening during a tour over the old district.

According to popular thought, the Christian worker will receive from Christ a crown, in which is a jewel for every soul won from sin. Then our friend’s crown will be a bright one. He turned many to righteousness – “under God,” he would say, and we will gratefully adopt his phrase. His sole aim has been to bring people to Christ. He has known neither party nor creed where individuals have been willing to hear the word of truth. If in the wards of the workhouses Catholics as well as Protestants could hear him, he just smiled and said it would not hurt them. But the priests thought otherwise, and a determined effort was made to stop him from reading and praying so that Catholics could hear, an alderman declaring in the City Council that he was “the greatest proselytiser in Sheffield, and as stupid as Luther himself.” They could not stop him. he went about his work very quietly, never remarking on matters outside his immediate purpose. An intimate acquaintance of nearly thirty years does not furnish a single case of social or religious difficulty through any indiscretion of speech or conduct on his part. Like Irene Petri in Cashmir, he has just “lived among the people and loved them,” and thereby has won them. Pond Hill has greatly changed in recent years, workshops superseding dwellings, and Mr. Graham’s labours have been in part transferred to other localities, but there remain still many homes bright and happy through his ministry. Hundreds of souls on their deathbed have been by him led to a faith in Christ that has made their end peaceful and given hope of a better life.

Very reluctantly Mr. Graham has acknowledged that his active service is over. Literally broken with toil, he rests awaiting the final call of the Master he has so faithfully served. He finishes where he began – in close association with his own Church. He loves the class-meeting. Now more closely confined to home his companion is a copy of the “new Testament and Psalms,” from which he has so frequently read for the comfort of others. The simple Gospel of faith in Jesus Christ, through which he has seen so many brought to God, is the sole and sufficient stay of his own souls. Mr. Graham has given one son to the ministry, who is now stationed at Southport, and, in concluding this sketch, he would gratefully acknowledge that, as life draws on, he more fully learns how much he owes to the unobtrusive goodness of his father and to those traditions of his early life which concern his parents’ loving care for the “cases” of rescue on the Pond Hill “district,” many of whom were seen with wonder to become new characters through the power of the Gospel of Christ.

William was baptised on 20 September 1837 at Thorne, Yorkshire. His parents were John Charles Graham, an ironmonger, and Hannah.

Before becoming a town missionary, William worked as a tailor.