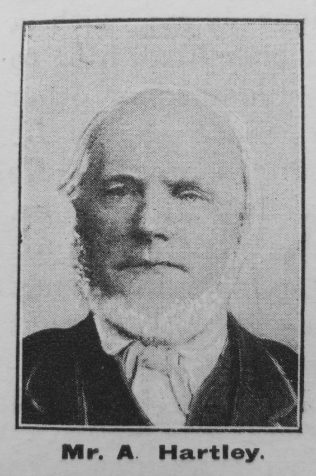 Transcription of Obituary in the Primitive Methodist Magazine by John B. Buglass

Alexander Hartley, of Barley, was born September 29th, 1820, and died November 31st, 1902. In early life he was the subject of deep religious impressions, which never left him, but which resulted in his conversion when about twenty years of age.

Having joined the Primitive Methodist Church he soon began to exercise his gifts in public speaking. He became a local preacher, which office he held for the long period of sixty-five years. He also sustained for many years the responsible positions of class leader, society steward and Sunday school superintendent. He will be greatly missed in the Primitive Methodist Society, at Barley, where he was deservedly esteemed for his work’s sake. A more loyal Primitive Methodist than he was, is not to be found in our Church. His love for missions was evinced by the fact that for many years he travelled miles with his box, bringing to the Missionary Meeting a handsome sum which enabled the Barley Society to make a good show in the Missionary Report. He was a firm believer in conversion. His mind was upon getting the young men and women saved. We are glad to say that he loved to see quite a number of the young people join the Church. About eighteen months before his death he had a slight stroke which confined him to his bed. From this he never fully recovered. Some of his friends did think that he might rally for some two or three years. This, however, was not to be. The call came to higher service, and when it came he was perfectly ready. His remains were laid in Wheatley graveyard, in the presence of numerous friends. His funeral sermon was preached at Barley, on Sunday, December 14th, 1902, by the Rev. J. Buglass, to a large audience.

In the death of Bro. A. Hartley, the Society at Barley in particular, and the Barrowford and adjacent circuits in general, have lost a true friend, a devoted Christian and a loyal Primitive Methodist. May his mantle fall upon those whom he has left behind.

Alexander was born at Whitehough, nr Barley, Lancashire, to parents John, a farmer, and Betty.

Alexander married Catherine Nowell (1811-1883) in early 1862 in the Burnley Registration District, Lancashire. Catherine was a power loom weaver before her marriage.