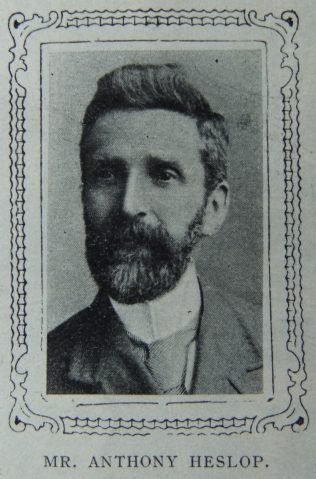 CHRISTIAN character is ever the best advertisement for any Church. For this reason Mr. Anthony Heslop has been justly regarded as one of the most powerful assets of the Primitive Methodist community in Bishop Auckland. It is upwards of forty years ago since he joined our Tenters Street Church. He is now one of the most familiar figures in connection with our Central Church, where he has rendered conspicuous service in the various capacities of Society steward. Class leader, Sunday school teacher, treasurer to the Trustees. In all these positions he still continues with undiminished devotion, not only discharging his own duties in a capable and judicious manner, but also giving evidence of those still nearer qualities that inspire loyalty and devotion in others. With admirable tact and exemplary self-sacrifice, in season and out of season, he has lived and wrought for his church. His fine personality has thus played no inconsiderable part in moulding its inner life. Himself a man of deep spiritual experience, his testimonies and prayers never fail to give tone to our devotional meetings. Nor is he less impressive in business meetings, where he jealously guards the peace and harmony of the church. He is a quaint story teller, and invariably enforces his points by the aptness of his illustrations. What a book might be compiled out of his repertory of dog stories! Many years ago the editor embodied some of them in his Covenanting Story, “Cleuchbrae.”

Our friend’s broad sympathies and unstinted generosity, together with his personal integrity, have  enabled him to wield an influence far beyond the precincts of his own church.

Anthony was born in 1850 at Hamsterley, Co. Durham, to parents Matthew and Ann. Mathew was a miller and farmer.

Anthony earned his living as a butcher.