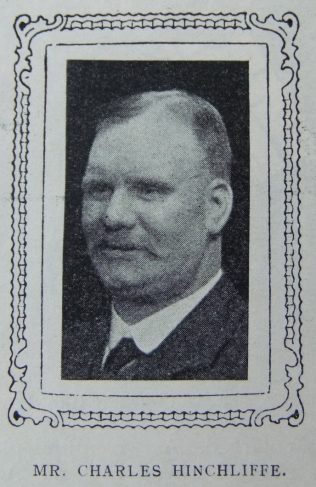 MR. CHARLES HINCHLIFFE is a Yorkshireman, as every one knows who enters into conversation with him. His speech bewrayeth him. Fifteen years ago he came from Wakefield to Burton-on-Trent and immediately joined Mosley Street Church. During the whole of that time he has been an invaluable worker among us.

In three departments especially, Mr. Hinchliffe takes a foremost place. As one of the superintendents of the Sunday school his sunny countenance and optimistic disposition easily win a way to the confidence of the children. As teacher of the Young Men’s Bible Class he is also deservedly popular, and has met with considerable success. Mr. Hinchliffe believes in the C.E. He has been a consistent supporter of the movement ever since its commencement at Mosley Street Church, and for several years has filled the office of Vice-President of the Senior section and President of the Junior. His Junior Society is one of the largest and most prosperous in the town. Week by week nearly sixty boys and girls share the joy of his fellowship. The other department of church work in which Mr. Hinchliffe engages is the Class meeting. He has never assented to the idea that attendance at the C.E. makes superfluous attendance at the Class meeting. He believes that the one fellowship prepares for the other, and that neither can adequately substitute for the other. As a Class leader he excels. Bright, witty, reverent, with the gift of song, he can always make a Class meeting “go.” Mosley Street Class meeting is one of the most successful services of the church, but never do the members who attend it have a better time than when Mr. Hinchliffe is in charge. As a leader, his services are invaluable.

Charles was born in 1863 at Hunslet, Yorkshire, to parents William and Elizabeth. William was a papermaker.

Charles married Frances Bailey 91863-1924) in the spring of 1885 at Hunslet, Yorkshire. Census returns identify one of three children.

Note: I have not been able to identify a death record for Charles.