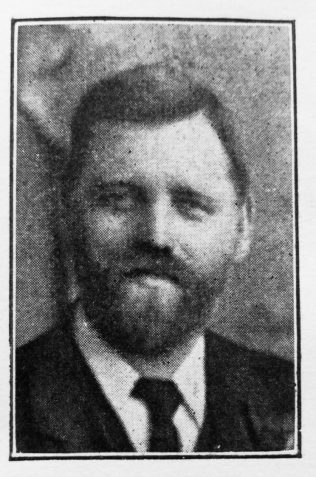 Transcription of Obituary in the Primitive Methodist Magazine by J.D.T (John Day Thompson)

It was the saddest of days for our little Wesham Society in the Blackpool Station – and indeed for the whole circuit – when the news went round that David Holmes had been called away, in the prime of his days, at the early age of forty-four years.

For ten years he had not only filled a most worthy and useful part, but had been the main pillar of our Church in the place. He was a native of Leyland, near Preston, and was born there on March 28th, 1861, the son of John and Ann Holmes, the first of whom is still living – at the age of sixty-nine – an honoured and pious official of Preston 3rd Circuit. David was a typical Lancashire lad of fine physique and of abounding spirits, but always with a vein of deep seriousness.

During a Revival Mission conducted in the Saul Street Chapel, Preston, by the late Rev. George Warner, in 1868, David decided for Christ, and immediately joined the Church. For several years after he lived and worked at Whitestake, where he married in 1883, Miss Elizabeth Southworth. Four children have been born to them, of whom three survive. Mrs. Holmes is a woman of admirable spirit, and their married life was very happy. David filled at Whitestake with great usefulness the offices of Sunday School teacher, organist and trustee. He was also trustee for Faringdon Chapel and one of the managers of our Eldon Street Schools in Preston until they were let to the Education Authority.

From the time of his removal to Wesham in 1895 he did yeoman service there – as organist, chapel secretary, and co-treasurer, and in many other ways. Often when preachers failed to take their appointments he would occupy the pulpit, though he was never on the plan. He was a strong man in every sense, with clear and decided convictions, a sound temperance worker, and a thorough Liberal in politics. Not long before his death he had been appointed secretary of the newly-formed Free Church Council for the district of Kirkham. He was deeply, though not demonstratively religious. He represented his circuit more than once in District Meeting, and on District Committee, and at the time of his death was a member of the Liverpool District Sunday School Committee. He had been appointed to take the chair at a Convention at St. Helens about the time he fell ill, and a special resolution of sympathy was forwarded to him. A virulent carbuncle was the cause of his death. He suffered from it, with characteristic patience, for some eight weeks. Although an operation was tried it proved too late, and he died on November 13th, 1905.

We interred his body at Hoole, in the grave where his mother also rests, (she having died in June, 1904, at the age of seventy), amid signs of deep sorrow, the Rev. Joseph Prestwich and the writer officiating.

On the following Sunday evening the Rev. Joseph Prestwich (a life-long friend of the family) preached a fitting memorial sermon to a crowded congregation. He is ill spared from such a village as Wesham. A memorial tablet is being placed in the Church to mark our sense of loss and of deep respect for his character and work.

David was born to parents John and Nancy. John was a cotton weaver (1861) and later a farmer.