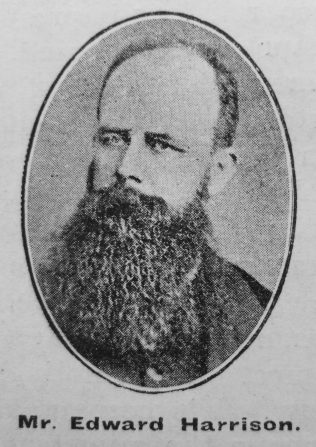 Transcription of Obituary in the Primitive Methodist Magazine by J Bradley

For quite a generation the name of Edward Harrison was prominently associated with Primitive Methodism at Birkenhead, and especially with the Mount Tabor Church. When, therefore, the news circulated on April 9th, 1902, that he had passed away everyone felt that a leader in our Israel had fallen. He was born at Welshpool 59 years ago, and came of a sturdy Puritan stock who counted it an honour to suffer persecution for the Kingdom of Heaven’s sake, in the early part of last century. The story of their Christian heroism caught his youthful imagination and remained with him an inspiring memory all his days. Early in life he became associated with our Church. About thirty-five years ago he came to Birkenhead and at once united with what is now the Mount Tabor Church. The cause then was much weaker and less influential than it is to-day, but our friend soon became “a pillar,” and such he remained till the Master called him higher. As a local preacher, class leader, Sunday school superintendent and trustee, he rendered unstinted and invaluable service and won the affectionate regard of his fellow officials and members. The ministers too loved and trusted him.

As a class leader he excelled; though a busy man having a large business to superintend he was ever attentive to his class, and his words of counsel, backed as they were by a sincere and consistent character and a rich Christian experience, were always full of inspiration and encouragement to the members. When the Birkenhead 2nd Circuit was formed a few years ago, his brethren honoured him by electing him Circuit Steward. This office he filled with conspicuous success until compelled by ill-health to relinquish it last year. He was a man of considerably more mental power and force of character than the average. As a local preacher his sermons sparkled with racy humour and were always interesting and impressive. Mr. Harrison was distinguished for his sturdy independence and self-reliance; his purity and simplicity of purpose; an intense love for his own Church and anxiety for her welfare, without a touch of bigotry. His religion was not of the loudly demonstrative type; but the note of candour, sincerity, and reality was as unmistakeable as the ring of a sterling coin. For a long time his health had been failing, and a few months before his death it became evident that he was suffering from a serious heart affection; but he bore his heavy cross with great patience and fortitude of spirit, ever grateful for the sympathy and kindness of the many friends who visited him; and he retained his characteristic cheerfulness and humour to the last. He faced death, as he had faced the ordinary duties of life, with patient courage and confidence in his Redeemer. When reminded that the end was near, he replied:
“I fear no foe with Thee at hand to bless;
Ills have no weight and tears no bitterness.
Where is death’s sting; Where grave Thy victory?
I triumph still, if thou abide with me.”

The memory of his work and worth will long remain as an inspiration to those who knew him, to emulate his example.

Edward was born in 1843 at Welshampton, Shropshire, (not Welshpool) to parents Francis, a tailor and toll collector (1851), and Martha.