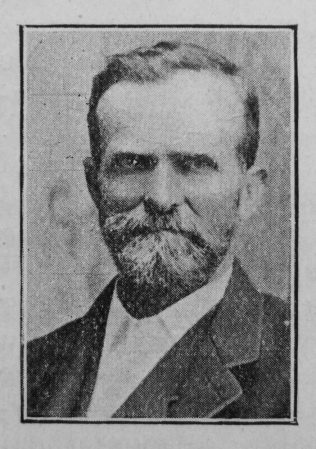 The shadow of death has again fallen on our Redearth Road Church, Darwen,  and we have suffered a heavy loss in the passing there of one of our most faithful members and deeply earnest fellow-labourers, the late Mr. E. Harwood. Amid our gloom, we have, however, glints of light, and find real cause of thankfulness in that, whilst we are impoverished he is enriched, and most assuredly removal to him has been promotion; the Master, marking his diligence and fitness in service, has called him to higher position.

Brother Harwood was born at Darwen, in the year 1843, and to the town of his nativity gave the whole of his life and service. From his boyhood days he was interested in our church work, especially in the Sunday School and Band of Hope. For a number of years he was largely withdrawn from the. fellowship of the church through becoming ensnared by bad companions and evil associations. But by the grace of God, and the help of good friends, those evil fetters were broken, and over twenty-one years ago he became a total abstainer; the desire for strong drink was entirely removed, and henceforth he was the sworn enemy of that tyrant which had so cruelly enslaved him.

Not content with this wise step, he felt that another step must be taken if he would be what he ought to be in character and life, and do what he ought to do in temperance and Christian service, and a few years later, during the ministry of the Rev. T.H. Hunt, as Mr. Hunt was preaching one Wednesday evening, Brother Harwood gave himself fully to Christ, and there and then received forgiveness and the immediate witness of the Spirit to his acceptance. He at once threw himself into active service, and rendered splendid assistance to the Sunday School, Church and Circuit, as Sunday School visitor, trustee of the Church, and Sunday School representative in the Quarterly Meeting. He specially loved the work of the Sunday School and Band of Hope, and  Sunday School and highly appreciated the public services of the sanctuary.

He was truly a religious man, and carried his religion into every department of his busy life. He was a hard-working man of business (a quarry-master by profession), ever upright and just, known to masters and men alike for his sterling uprightness, perfect straightforwardness, and absolute justice and integrity. His religion guided him in his commercial transactions, and his workmen and all with whom he had business relations, knew that they had to deal with a righteous man, who scorned all meanness, and ever did that which was good and just and true. In his home life his religion was sweet and winsome, and he manifested a beautiful Christly spirit. He was a loving husband, and a tender father to his children, who never had cause to doubt the reality of his religion, and by his relationship to them he quietly and without ostentation, but most powerfully, gave clear proof of the inestimable value and infinite preciousness of the Christianity he had embraced. His most ardent desire was that his children might be brought into fellowship with the Saviour, and be serviceable to the Church, in whose service he had the deep joy of seeing three of his children actively engaged,

The reality of his Christian experience was never more beautifully exemplified than during his painful and protracted affliction of over twelve months duration. All that medical skill could do was done, but all in vain; the deadly disease progressed, wearing down what had been a strong constitution; until early on Saturday morning, October 15th, the end came, and our friend passed to the better life, exchanging weariness and pain for rest and joy and life immortal.

A large congregation gathered in Redearth Road Church, on October 20th, to pay their token of respect and affection, where a most impressive service was conducted by the Rev. Joseph Maland, who paid a tender and touching tribute to the worth of the departed saint and worker. The favourite hymn of the deceased, “Come ye that love the Lord,” was sung, and the “Dead March” expressively played on the organ.

And so we bade farewell until we also pass beyond the shadow into the Eternal Light, thankful for the inspiration of the faithful and devoted life of our friend and fellow-labourer, sincerely emulating his example of uprightness, Christliness, and earnest, diligent service, and commending the bereaved widow and family to the Almighty care and goodness of their Heavenly Father, whose wisdom never errs, whose love never fails, and who is ever vigilant in watching over His children and ministering to their needs.

Edward was born to parents Edmund, a coal miner, and Sarah.

Edward married Ann Walsh (abt 1842-1912) in the summer of 1864 at Darwen, Lancashire. Census returns identify six of nine children.