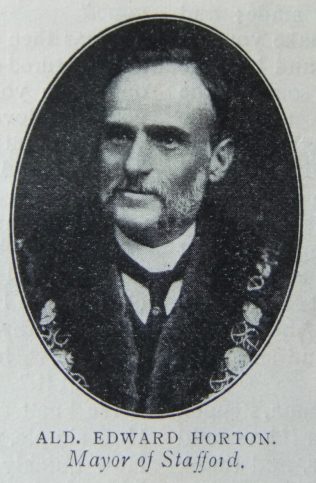 Transcription of ‘Sketch’ in the Christian Messenger by Rev. Albert A Birchenough

After residing for over a generation in Hugh Bourne’s ancient county town of Stafford, Alderman Edward Horton by a unanimous vote has been elected to the civic chair. As he is the first Primitive Methodist in the old borough who has been called to this high honour, on Mayoral Sunday he invited the members and officials of the Stafford Corporation to attend Divine worship at his own church. He also dispensed with the customary Mayoral Banquet, and in lieu thereof, he handsomely presented a cheque for £100 as a nucleus of a Mayoral Million Penny Scheme for liquidating the debt upon the Staffordshire General Infirmary.

By birth Alderman Horton is “a proud Salopian” and was born at Shrewsbury, October, I847. Unfortunately both parents died during his early youthood. Upon attaining his majority he emigrated to the United States of America where he became soundly converted and joined the Methodist Church. During 1872, he returned to England and became a member of our Communion.

He has been successful in establishing a prosperous mercantile business in Stafford and at Wolverhampton. For a brief period he resided in Sheffield, where he worshipped at Hoyle Street Church: and became acquainted with Miss Pasley, daughter of a manufacturer whose family were prominently connected with Primitive Methodism. They were married in 1881, and their family consists of three sons and four daughters, all of whom are eagerly interested in church activities.

Although a busy man, and naturally of a retiring disposition, Mr. Horton has found time to serve the church in several important departments. As a devoted Sunday school teacher and earnest temperance worker he has had the joy of seeing the fruits of his labours. Some whom he has influenced are occupying positions of trust and responsibility. In 1886 he became assistant Society steward, and in 1901 the Society steward, and has helped the Stafford church to grow to its present influential position. He is most regular in his attendance at the week-night preaching service and at the Society Class meeting, of which he is a leader. He is also a Trustee, and has represented his Circuit in the Annual Synod. He is most liberal in his benefactions. His gifts to Stafford Church and congregation include a valuable silver Communion service, six silver offertory plates, and a pipe organ of the value of £225. He is an active member of the Free Church Council, has served as vice-president, and has been a representative to the National Council. Owing to pressure of business and fidelity to his own church, he has had, somewhat reluctantly, to decline many outside honours, and invitations for wider service.

Besides his early acquaintance with America he has travelled extensively. Twice he has visited Australia. He is also acquainted with New Zealand, Egypt, the Samoan, the Fiji, the Sandwich Islands, and the growing cities of Canada. On some of these world-wide journeyings he has been accompanied by Mrs. Horton. His appointment to the Mayoralty has given general satisfaction to Staffordshire Primitive Methodists, and to the members of the Free Churches of the ancient county town, by whom he is greatly respected for his nobility of character.

As a church and Sunday school worker, his eldest son, Mr. Harry Horton, of Wolverhampton, is closely following in his father’s footsteps. He is an acceptable local preacher of no mean order; and his administrative qualities are highly appreciated by the Dudley Road Church. Mr. Harry Horton was one of the lay representatives of the West Midland District Synod at the recent Centenary Conference at Tunstall, and had the distinction of being the youngest delegate in that important annual assembly.

We anticipate for our friend yet more valuable service. He is one of those men who are ever gaining greater power of service by faithful use of opportunity. May his bow abide in strength, and hls shadow never grow less.

Edward was born on 6 October 1847 at Shrewsbury, Shropshire, to parents Edward Horton and Jane Parry. Edward, senior, was a shoemaker. Edward was baptised on 25 February 1849 at St Chad, Shrewsbury.

Edward worked in the hat trade. By the time this article was published he had retired and emigrated, initially to Canada and then Australia.