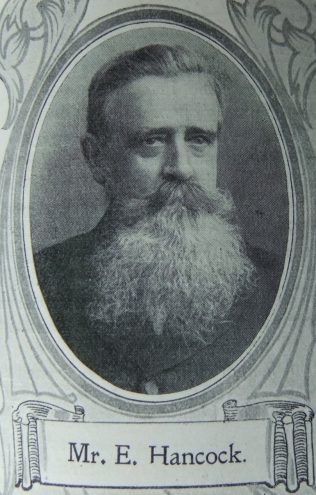 Mr. Edwin Hancock, Senior Steward of Congleton Circuit, is now in his sixty-second year. He has been our “Chancellor” approaching twenty of those years. Nature and providence have both been kind to him. He is healthy, active and strong.

Although born at Congleton he has spent most of his life at the far-famed Mow Cop. He joined our church when but fifteen years old, and became a local preacher at sixteen. He has held most of our circuit offices, has been Delegate several times to District Meeting, and once to Conference. He has one brother, Rev John Hancock, who served the Connexion worthily as minister upwards of forty years, now on the supernumerary list, and one son, Lewis, now occupying a promising position among our junior ministers.

Urbane, kindly, and tactful, Brother Hancock is a credit to the office he holds. May he long be spared.

Edwin was born in 1846 at Congleton, Cheshire, to parents Ralph and Emma. Ralph worked the land and Emma supplemented the family income as a dressmaker (1851). Later, Ralph was a labourer for a brickmaker. Edwin’s brother, John, became a PM Minister. Edwin was baptised on 25 October 1846 at Astbury, Cheshire.