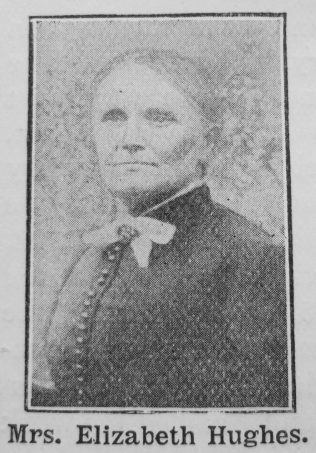 Transcription of Obituary in the Primitive Methodist Magazine by A.A. Birchenough

Elizabeth, relict of the Mr. Benjamen Hughes, was born at Tenbury, Worcestershire, on December 23rd, 1828, and departed this life on March 22nd, 1901, at Green Heath, Hednesford. Early in married life she, along with her husband, removed to the mining district of South Staffordshire. In the year 1858 she experienced a change of health during a gospel mission at Willenhall, conducted by Mr. Richard Weaver, the noted Shropshire evangelist. Without delay she joined the society worshipping in a cottage at March End in Darlaston Circuit, and remained a consistent member of our Church until her death.

For the past twenty-seven years she resided at Green Heath, and for some time was a member of the Hednesford Church in the Bloxwich and Cannock Circuit. When our people commenced a mission at Pye Green in Stafford Circuit, she, along with her late husband, threw in her energies with the infant cause. In every possible way she promoted the material and spiritual interests of the Church. By her prayerfulness, consistency of character and ministry of love she proved herself to be “a mother in Israel.” Her home was always open to the servants of the Lord, for she was given to hospitality. She was a great lover of the Old Book, and was deeply attached to the services of God’s House. Her home-life was most exemplary. Her sons and daughters are useful officials and members of the churches.

For a short time before her decease she was greatly afflicted and kept her bedroom. In her afflictions she murmured not, but patiently waited, and “endured as seeing Him who is invisible.” In her closing hours she bore testimony to the saving and keeping power of her Divine Father. Calmly her spirit passed to the home beyond. Her mortal remains were laid to rest in the Hednesford Cemetery, the writer and Rev. J. Page taking part. An impressive In Memoriam Service was held in the Pye Green Chapel, conducted by Mr. William F. Lloyd, who has been intimately acquainted with the family for many years.