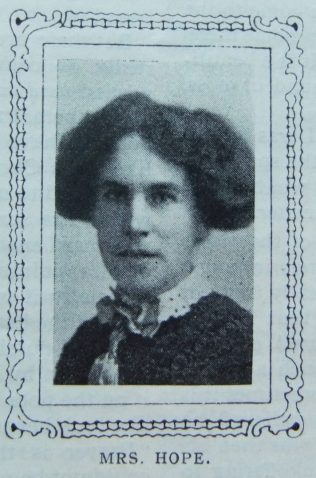 BORN on June 21st, 1877, at Terrington. in the North Riding of Yorkshire, Mrs. Hope is the daughter of Robert and Mary Newlove, two esteemed members of our Church, and has pleasant memories of religious services held at her grandfather’s house at Gawthorpe.

In her sixteenth year she dedicated her life to Jesus Christ. In 1899 she was married to James Hope of West Lutton, and after residing at Gawthorpe and Langton Wold they removed to Sleight‘s Farm, East Acklam. It was an ideal union. Both were deeply interested in the work of the Church, the husband discharging the duties of Society steward and Class leader. On December 26th, 1910, Mr. Hope, after a protracted and painful illness, entered the heavenly home, leaving our friend a widow with four young children. This great loss was borne with unquestioning resignation. Since her husband‘s death she has held the offices of Society steward and Class leader, organist and chapel treasurer. No one in the Malton Circuit is more highly appreciated. With a genius for work, she unites the power of inspiring confidence and winning affection. It is not easy to estimate what our East Acklam Church owes to her sterling character, magnetic personality and valued services. More than two years ago it was necessary to repair and beautify the chapel, at a cost of more than £30. This was a difficult task for a church of only twelve members, but with Mrs. Hope in co-operation the work was done, and the whole of the money raised. Our friend is serving a second term as President of the Leavening and East Acklam British Women’s Temperance Association. As a public speaker she is thoughtful fluent, and effective.

Emma was born to parents Robert and Mary. Robert worked the land.

Note: The death registration for James Hope identifies he died in 1909 not 1910 at recorded in the sketch.