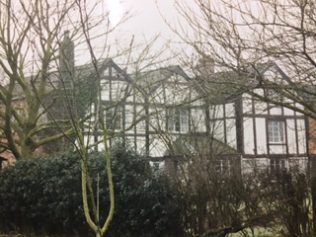 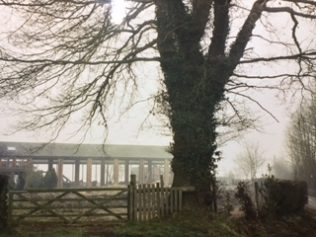 George was the son of William and Sarah Harvey who, in the early years of the nineteenth century had farmed Outclough farm, Norton, Stoke on Trent. Outclough is now part of what was Chatterley Whitfield colliery, and it was the expansion of coal mining that seems to have prompted their subsequent move to Horton. However at Outclough, just below Ridgeway, and adjacent to Farmer Birchenough on Standley Fields,  they had been very near neighbours of the  Bournes at Bemersley. George’s father was an almost exact contemporary of Hugh.

George married a lady whom Kendall refers to as “one of the proteges of Hugh Bourne” at Horton parish church on 3 October 1837. The local and camp meeting preacher Elizabeth ‘Betty’ Dakin of the Cloud. The P.M. 1861 obituary for George states “as providence had to fix their lot and the bounds of their habitation, their future residence being alike unknown to both, they would join that people, whether Wesleyan or Primitive, whose place of worship was nearest to their own dwelling.” Moving into Cheshire in 1837, to Dove House farm they first worshipped with the Wesleyans at Hough but on moving in 1845 to The Oak Farm (220 acres) at Broomhall they joined the Primitive society,  though there was not a local chapel building. Kendall notes “on their removal to Oak Farm, Broomhall, in 1845 they were numbered among the influential of the Burland circuit.”

They entertained Hugh Bourne, under whose preaching Elizabeth had been converted in 1811. So on Wednesday 28 April 1847 Hugh Bourne wrote in his journal “Mr Harvey, Oak Farm Broomhall. At night I preached from Acts xv1. 8-40 with good liberty. Mr Harvey’s house was filled.” Hugh Bourne was visiting his former protege Elizabeth.

It appears that The Oak farm was a preaching place of the Broomhall and Sound Primitives.The Circuit’s Quarterly minutes confirm that there was no Primitive Chapel till much later, for the March 1860 meeting resolved “that the friends in Sound Heath have liberty to build a chapel if they can make it agreeable among themselves.”  The P.M. magazine for March 1858, in an account written by the then minister H. Wheeler, named Mr G Harvey of the Burland circuit and thanked him for the work he had done with missionary collections. George Harvey himself wrote an obituary for the P.M. Magazine published in the October 1860 edition. This obituary was for Ellen Weaver of Broomhall who had died 12.3. 1860, (she was the wife of “my Waggoner John Weaver” who was left £50 in George’s will, and the John Weaver who registered George Harvey’s death on the basis of the qualification of being present at the death). It appears probable that this is the same ‘John Weever’ living at Dove House Farm in the 1841 census.

The obituary tells that Ellen with her husband had joined the P.M. class at Sound Heath, (she is probably the Mrs Weaver referred to in the 1858 account of Missionary box collections in the Burland circuit, when she had collected the then very large sum of £2 10s 3d).

“She was mostly confined to her room for the last four months, and on the Wednesday before she died she sent for us. Thinking her end was near, I and my wife went and found her very ill – – about six hours before she departed, my wife, her husband, and her mother being present, she lifted up her hands, and clapped them together in token of victory, and went to be for ever with the Lord.”

George Harvey’s obituary states that on his removal to Broomhall in 1845 he had joined the class of William Smith of Sound-Heath, whose death was reported in the P.M. magazine 1854. Typically the memoir emphasises William’s commitment to the class. So the context of this Primitive Methodist class was one where the leader “was punctual in his attendance and pointed in his exhortations; and if he did not personally visit the absentees as he should, if any one strayed, his whole soul seemed to follow the wanderer. He always bore his members on his heart before the Lord and their respect for him was great.”

Temperance was closely linked to all the non-conformist churches, but to Primitive Methodism especially. The Cheshire Observer of August 1858 reported  a “Temperance Demonstration at Broomhall near Nantwich” organised by a society which had only been started 12 months previously. The report read “friends connected with the Temperance movement in Broomhall and neighbourhood held a tea meeting in a capacious tent erected for the occasion in a field adjoining the residence of Mr. Harvey.” It continued to give brief details of the five mile procession led by a band through Sound Heath, Wrenbury and Aston, together with the ‘innocent’ games played afterwards.

The Quarterly minutes of the Burland Methodist circuit confirm that Brother George Harvey of Sound Heath received a note authorising him to preach in March 1855, which was renewed in September. He was put on trial as a local preacher on June 15th 1856, and on full plan on December 15th 1856. It was not an uneventful experience for in the demanding context of the circuit, having been planned at the Quarterly meeting on March 16th 1857 as one of the speakers at the Tea meeting at Audlem on May 12th, the following June 22nd meeting recorded the penalty for not keeping an appointment, “Bro. G Harvey sink one figure for neglecting Audlem,”—that is to sink one place down on the table of preachers on the plan. The obituary noted that he had fallen ill after presiding at a tea meeting at Sandbach, (a society recently transferred out of the Burland Circuit) and as a preacher through failing heath he could take but few appointments. Formally the Burland Quarterly meeting on June 18th 1860 recorded as minute number 10 “Bro. Harvey have no appointment on account of illness.”

Even after the death of George the Methodist influence brought about by his move to Broomhall continued. The tenancy of The Oak farm was continued by the children of William Wright, George’s brother in law, and a devout Methodist. William had married Jane Harvey at Horton in 1829, and farming first at Rownall, Staffordshire had moved by the 1851 census to Cloud House farm, Rushton.

The Oak farm was farmed after George’s death by two of his nephews, firstly by Levi Wright who was present on the 1861 census, then on the 1871 census by George Wright, another nephew. Levi had emigrated to Australia. Levi had married in November 1860, “at Wrenbury near Nantwich Mr. Levi Wright of Broomhall, third son of Mr. William Wright of Cloud House near Congleton to Martha younger daughter of Mr. Richard Lee of Coobe-hall, Nantwich.”

Tenancy of the Oak Farm then passed to George’s son William on George’s death in 1889, and finally for the Wright family to Williams children. Through marriage the family had by then linked up to create the create the local Wright Manley family.