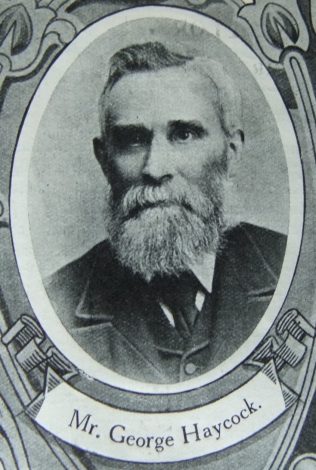 Mr. George Haycock, who for the past 14 years has held the office of Circuit Steward of the Sheffield 7th Circuit, is a man of considerable versatility, as may be seen from the fact that he has filled nearly every office in the Circuit. He has been Society Steward, Class leader, School Superintendent, and Local Preacher. The duties of these various offices he has discharged with great credit to himself as well as to the advantage of the Circuit. He has been a member of the District Committee and represented his Circuit at the District Meeting. Pious and painstaking, he is a man always to be relied on. Whenever one is required to fill a gap, to lead a forlorn hope, or to inspire timid workers with fresh courage, George Haycock is the man for the occasion. By reason of his quiet force and entire trustworthiness he has long been one of the bulwarks of this Circuit.

George was baptized on 18 June 1837 at Blyborough, Lincolnshire. His parents were Thomas, who worked the land, and Sarah.

George married Elizabeth Emmenson (abt1836-1905) in the spring of 1861 in the Gainsborough Registration District, Lincolnshire. Census returns identify seven children.