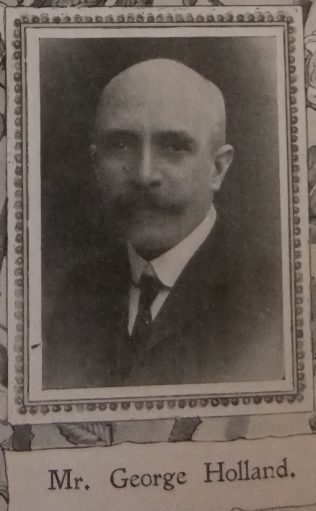 Mr. George Holland, of Sunderland Second Station, is an ideal circuit steward. A life-long Primitive Methodist and an expert business man, his most conspicuous characteristics are unimpeachable integrity, superabundant energy, overflowing geniality and an almost prodigal liberality – altogether, a man to command admiration, confidence and love. He delights to make things “hum” and whatsoever his hand finds to do – and it finds much – he does with all his might. To him it is literally “more blessed to give than to receive,” and in the consecration of his powers and his substance to the cause of Christ he finds a real means of grace.

A trustee of Tatham Street Church, the efficient superintendent of its growing Sunday School, the President of the Christian Endeavour Society, a local preacher of exceptional ability, who has filled many important positions in connection with inter-denominational organisations, our brother is yet only forty-nine and in the prime of his powers.

George was born abt 1858 at Norton, nr Doncaster, Yorkshire, to parents William and Ann. William was a boot and shoemaker.

The 1891 census shows George working as a Glass Bottle Works Manager living at Castleford, Yorkshire. The family moved to Sunderland where he worked as a glass bottle merchant.