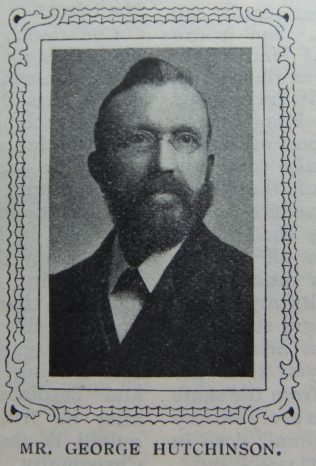 Mr. George Hutchinson has acted as Society Steward in our church at Knaresboro for the past 12 years, and he has fulfilled the duties of his office in a way which deserves special recognition. Of a quiet and retiring disposition, he is yet earnest and enthusiastic in all matters which affect the welfare of the church. As a business man he has been fairly prosperous, but the interests of our cause in this old town claim his first consideration. Many hours are spent in church work which most men in his position would use to further their own commercial ends. But our friend never places his own affairs before those of his church. He never neglects any duty belonging to his office, nor overlooks any detail of his work. He is present at all business meetings and rarely ever fails to attend the services except when he is taking an appointment at one of the country places. He has held the office of Society Steward since the erection of our new church, and it is to his devotion, together with that of a few other faithful workers, that our cause here owes much of its prosperity. Only those on the ground who are constant witnesses of his services can fully appreciate their extent and value.

Then, too, he takes an active interest in all matters which affect the Connexion as a whole. While chiefly interested in his own local church, he never forgets that he is connected with a much larger concern, and he endeavours to keep in touch with all movements which are going on in the wider field. He has only yet reached middle life.

George was born in 1854 at Alne, Yorkshire, to parents William and Ann. William was a basket-maker, an occupation which George also followed.