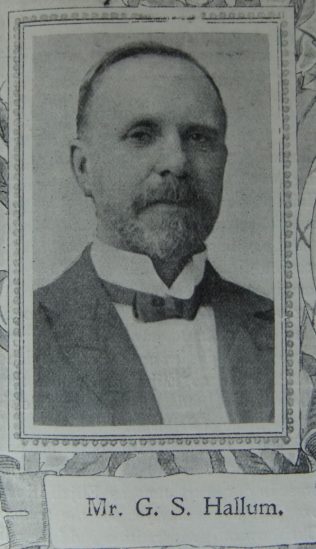 Mr. G.S. Hallum of Southampton 2nd Station, was born in 1859, converted when thirteen, and put on the plan at seventeen years of age. Taking a practical part in paying of the debt on an old chapel he took a leading part in the erection and Debt Reduction scheme of the new one, being trustee, secretary and treasurer. Four years Circuit Steward, he is a very acceptable “Anniversary” preacher, a life abstainer and non-smoker, practises systematic giving, has been delegate three times to District Meeting and twice to Conference. Mr Hallum is greatly blessed in his wife who was a good Primitive Methodist of Jersey, and also in his seven sons all of them abstainers, non-smokers and Methodists. Highly esteemed in the town he has served on the Board of Guardians, the Town Council, the Labour Board, and the Education Committee.

George was born in 1859 at Southampton, Hampshire to parents Alfred and Jane. Alfred was a harness maker.