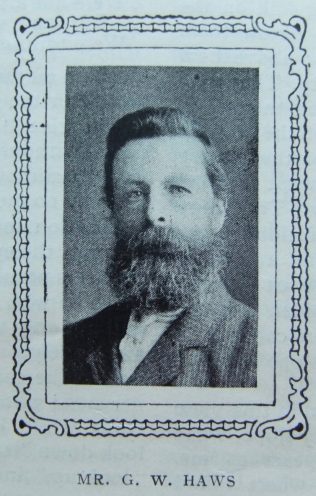 If, through the tide of emigration and the trek to the towns, a number of village societies, once strong, have either ceased to exist or are only just alive, there are still left many societies which are healthy, vigorous and consequently prosperous. Harpley Society, situated twelve miles from the Circuit town of Kings Lynn is such an one. During the past twelve months without any special Missioner, or the employment of any sensational methods, ten persons have joined the church. The office of Society steward in any society is honourable, but the honour is enhanced when the society is full of life. George W. Haws, a typical Norfolk working man, has for twenty years worthily held this office. He, appreciates the honour conferred upon him, and whilst respecting his position does not magnify it. Regularly, unostentatiously and courteously he performs his duties. If unavoidably prevented from attending the Quarterly Meeting and there being no other means of forwarding the report and monies, his wife will cycle to Lynn with the same. He is interested in all aspects of church work having been school superintendent and Class Leader for several years, whilst for thirty-three years he has been a local preacher. In fact he is one of the “handy” men of Primitive Methodism, ready and willing to do anything so long as progress is being made. He is a village stalwart, strong and true, and rejoices to give his strength, time and substance to the support and extension of the Master’s Kingdom. He and his colleagues work harmoniously together and it is not surprising that in this village Primitive Methodism thrives and that preachers have good times. May our brother be long spared to carry on this good work.

George was baptised on 26 April 1857 at East Rudham, Norfolk.

George worked on the land.

George’s death was registered in the fourth quarter of 1946 in the Fakenham Registration District, Norfolk.