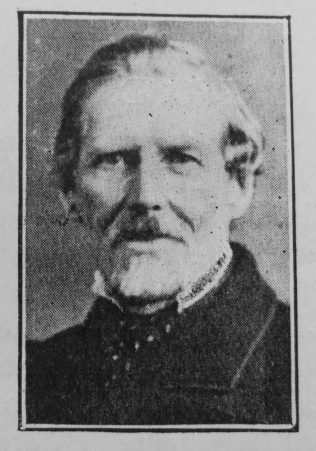 Transcription of Obituary in the Primitive Methodist Magazine by Thomas Markwell

Mr. Thomas Haigh was born at Crane Moor, a woodland village in the Barnsley First Station, on the 18th of December, 1839, where he resided sixty years. In his early years drunkenness and dog and cock-fighting, with other degrading customs, were dominant pastimes with the inhabitants. Unfortunately for himself parental restraint was not enforced, and for a few years he was a victim to the fascination of such vicious customs. He was prominent among the leaders in public-house entertainments, being possessed of a good bass voice, and musical taste and ability. But in his early manhood he came under the influence of a saintly Methodist class leader, and by such instrumentality he was persuaded to decide for Christ.

He joined the Wesleyan Society, but owing to some dissension that arose in it he severed such connection, and commenced along with others a new mission, that became associated with Primitive Methodism in 1873, when steps were taken to secure a chapel. By his indefatigable efforts a commodious village sanctuary with an adjoining school building was erected. He was an acceptable local preacher forty-one years, class leader and Sunday School superintendent during that time. In the later years of his life he suffered from general debility, proved to have been induced by cancer in the stomach. During the last month he lived he was very patient, and at intervals testified of his faith in the wisdom and love of God, and of hope he cherished that death to him would be gain.

He departed from earth to the eternal rest in Christ, on January 6th, 1907. His remains were laid to rest in the Cemetery at Thurgoland, after very impressive services held in the chapel at Crane Moor, and at the graveside, conducted by the writer of these lines.

Thomas was born to parents John, a coal miner, and Sarah.