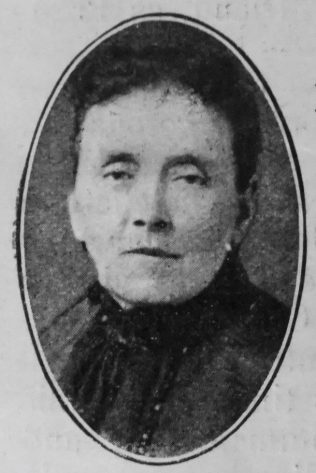 Transcription of obituary published in the Primitive Methodist Magazine by G.W. Turner

Mrs. Hall, wife of the Rev. Gervase Hall, of Wellingborough, was translated to the higher sphere and service on February 23rd, 1908. She was born at Leicester, May 16th, 1861, a Primitive Methodist of the third generation.

In 1874 her parents removed to Coalville. Here Mrs. Hall gave herself fully to the Lord, and at once gave herself to the Lord’s work, chiefly in the Sunday School and among young people—a work ever dear to her heart.

In this work and in other spheres, such as class leading, conducting mothers’ meetings, Band of Hope work, using her vocal and musical powers, she sought to serve the church of her choice, being a true helpmeet to her husband in the arduous and exacting toil of the Primitive Methodist ministry. Moreover, her presence was known in the homes of the people on the circuits where her husband was appointed, and by gracious and kindly ministries there, especially to the sick, the sorrowing, and the poor, she won their esteem and affection.

The depth of her piety and her unstinted devotion shone in purest flame around the family hearth, making their dwelling a true home. The bereaved ones must sadly miss her presence and devotion, her motherly affection and care.

Some very fitting and beautiful testimonies to Mrs. Hall’s work and worth have been given by persons and societies where she has laboured, showing how she has left her mark upon those with whom she came into contact.

For nearly twenty-three years she stood nobly by the side of him who now mourns his loss—a true companion and helpmeet, and a faithful and constant worker. Latterly she had to serve by waiting. The time of her suffering and waiting was patiently and resignedly borne. Now our Divine Father hath brought her to her desired haven, and in the country where she dwells “the inhabitants never say, ‘I am sick,’ for the former things are done away.”

May the God of all consolation sustain and comfort the bereaved husband and children, “until the day breaks and the shadows flee away,” and where, in the Father’s house, they shall meet to go no more out.

A memorial service was held in our Wellingborough Church on March 1st, conducted by the writer, when much respect was shown to the deceased by a large congregation.

Elizabeth was born on 16 May1861 at Leicester, Leicestershire, to parents Samual, a railway engine driver (1871), and Leah.