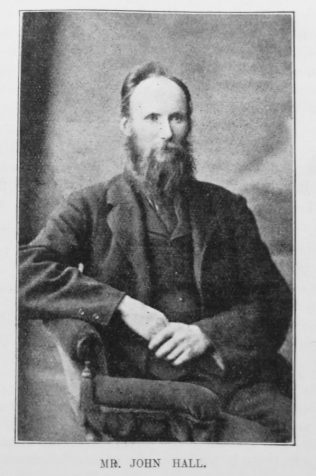 I WAS not long in Hexham before I heard of Mr. John Hall, of Hallington. His praises were on every lip. His name was “as ointment poured forth.” I remember the day when first I met him and the astonishment I felt in his presence. “Far from the madding crowd,” in a tiny hamlet of less than fifty souls, here was a man who had lived his sixty years of life in quiet, faithful service, in the love of books, in deep and serious thought, in unwearied Christian effort. Lowell’s lines in “All Saints” came to my mind and have never ceased to sing themselves to me:

“The bravely dumb that did their deed,
And scorned to blot it with a name,
Men of the plain, heroic breed,
That loved Heaven’s silence more than fame.”

Hallington is about a dozen miles to the north of Hexham and the demesne was in the possession of the Trevelyan family for many years. Here John Hall was born on August 6th, 1841. His schooling was of the simplest kind, first at Hallington and then at Whittington. Beginning as a labourer, he became the caretaker of the Hall and held the position until the estate was sold two years ago. For nearly fifty years he has been a member of our church. Primitive Methodism was practically the established church for miles around. Bavington, immortalised by Squire Shafto, is the adjoining village, John Hall’s mother was a regular hearer at the services, and the boy was at home with the Primitives. He became a Sunday School teacher and also a local preacher and revealed great gilts.

How different his life might have been! Twice he was called to the ministry of our church and once actually appeared before the District Meeting examiners. Without doubt he would have come to prominence and power, but he preferred the seclusion of his native place and the simpler walks of life.

But how noble his career has been! The Hall of which he was the custodian was a beautiful mansion, full of rare treasures, gathered from many lands. Its mistress was abroad for five-and-twenty years and never saw her Northumbrian home. John Hall kept vigil. Always anticipating her coming, everything was in perfect readiness. He was a faithful steward indeed. By and by, when the furniture and treasures were sold, people spoke in wondrous words of John Hall’s scrupulous diligence and honesty. Everything was there as the owner had left it, even the candles in the brackets and the soap in the basins. For a quarter of a century he kept faithful watch and ward. His rooms at the Hall were small and plainly furnished. I remember the quaint and simple mottoes which adorned the walls. “A stitch in time saves nine.” “A rolling stone gathers no moss.” He was the demonstration of the mottoes. It was curious to see him, far from the gaze of the world, vigilant in his duty, faithful in the smallest detail of his charge.

What a bookman he is too! In the silence and solitude he has pondered the deep things of God and the secrets of the soul. Some of the best things in literature are his inward possession. He is far more than a reader. He is a thinker, a brooder of thought. The meditative air is all about him and a query from him opens out vistas of speculation. A talk with John Hall is an education.

Primitive Methodism has no more loyal heart than his. He is steeped in the traditions. He is in love with its evangelisms and fellowships. For years and years he has taught in the little Sunday School on Sabbath mornings. For many years he did the trampings as a preacher, ever welcomed, greatly appreciated. In Hallington we have a lovely little chapel, his gift to the parish and his own people. People come for miles and miles to the services on the Sunday evening, and they respond to the fervent appeal and prayer. Unhappily he is now unable to attend the services through affliction, but from his own door he can hear the singing and worships in his heart. To the new church in Hexham he has generously subscribed and has heartened the toilers by his sympathy. Beneath the diffidence and stillness of his manner there are deep interests and loves.

His sister and his niece make his home, and what a home it is! Released from anxiety, they live together in usefulness and peace. There is something idyllic in their state. It is the preachers’ home and all are glad to come within its spell.

He is a great admirer of our denominational literature. He takes all the magazines and reads them thoroughly.

We have many distinguished men, Parliamentarians, preachers, gentlemen of the professions, great merchant-princes. Their worth is told and their work appraised. I am glad to tell of a man in an obscure place who has lived his life in a hamlet’s silence, who will rank with the best in keen conscientiousness, in the deepest loyalties, and in services at once faithful and disinterested.

John was born on 6 August 1841 at Hallington, Northumberland, to parents Alexander Hall, who worked the land (1841), and Elizabeth Tailford who were married on 3 June 1834 at St John Lee, the parish that contains Hallington.

Census returns describe John’s occupation as gardener. He did not marry.

In later life he lived with his sister, Elizabeth, and niece Eva Ridley.