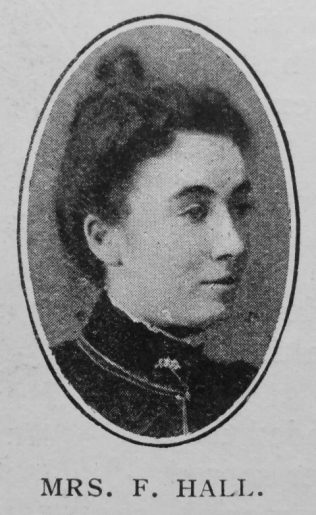 Transcription of obituary published in the Primitive Methodist Magazine by R.Pickard

On Dec 10th, 1911, Mrs Frank Hall passed away, aged 29 years. Born at Benson, near Wallingford, in 1882, our sister grew up in the love and fear of God. She became associated with our Church at Abingdon at about the age of 18, taking a deeper interest in the Church’s activities as the years went by.

She became the wife of one of our most respected and devoted local preachers. Our sister loved the house of prayer, and in her last illness she pathetically longed to go once again. Her generosity and self-sacrifice for her Church were beyond praise. The ambassadors of Christ ever received a most hearty welcome to her house. In her home she shone the brightest, unstintingly giving herself for her husband and little ones. No sacrifice was too costly, no burden too heavy to be borne. She lived a simple, trustful life in Jesus Christ, and in the hour of affliction and death found comfort and strength in the faith she held.

Kate was born in 1882 at Benson, nr. Wallingford, Berkshire, to parents Alfred, who worked the land, and Emma. She was baptised on 25 June 1882 at Warborough, Oxfordshire.

Before her marriage, Kate worked as a general domestic servant (1901).

She married Frank Hall (1878-1963), a grocery trade assistant (1911), in the summer of 1905 in the Wallingford Registration District, Berkshire. Census returns identify three children.