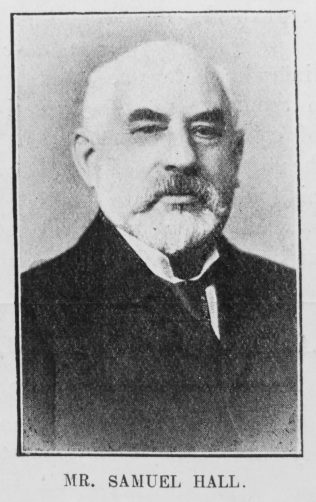 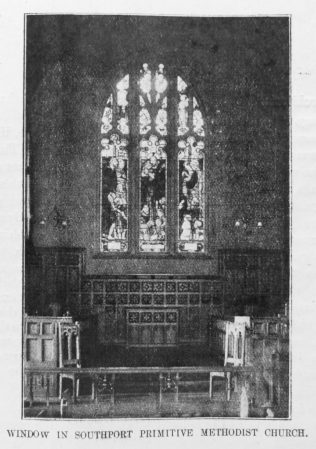 WITHIN the last few years a new name has come to the fore as one of our most generous—even princely givers to all worthy objects. As from time to time reports have told of some handsome contribution the question has been asked, who is Mr. Hall? To meet this desire for light and for closer acquaintance, we with pleasure pen the following facts.

Our friend was born in the City of Manchester —of which his present place of residence is said to be but a beautiful suburb. He is pre-eminently a self-made man. Losing his parents at a very early age, he had to face the world for himself, but in the language of his distinguished contemporary, the Right Hon. John Burns, he kept his face to the dawn, and brilliantly has he played his part. First starting as an engineer and ever developing brain and character, in twenty years we find him with a large estate on hand which by his own genius and push gradually took shape in the form of one of the most popular and most populous districts within an easy radius of the great city of his birth. This meant not merely prosperity but affluence so that the money he gives is clean —it has not been stained by the blood of exploited men and women or won in transactions that do not bear the fierce light of the strictest honour.

At the time this great work was on hand he was residing in Salford, afterwards Sale, and was in connection with the Wesleyan Church and officiating in such capacities as Society steward, Circuit steward, holding at various times every position save that of class-leader. He has never been a mere nominal adherent, but wherever he is or whatever he touches a big soul comes into evidence. As a Society steward, by his personal inspiration and encouragement he saw the class monies go up from £37 to over £60, and the other departments flourished in the same proportion. For some years he has resided in Southport and attended the services of our Church.

Mr. Hall came originally into touch with our Connexion – through his second wife, who was a daughter of that well-known hero of the cross —Jonathan Ireland, and his sympathies have grown with the years. He is a genuine Methodist and has a profound love for that Methodism which is represented by the old formulae. He loves an earnest, vigorous Gospel, and his whole soul goes out to and with anything that means Methodism’s advance. It was in connection with the new church project that his name came into prominence—although without ostentation or clash of cymbals he has given away thousands of pounds before.

A local press report aptly described the scene: “Sir William P. Hartley started the scheme for the new church, and made his offer of adding 10s. to every £1 raised by the congregation. Immediately Mr. Hall cried out, ‘How long will it be before the scheme is started?’ ‘At once,’ came the reply. ‘Then I give you £500,’ said Mr. Hall amid the applause of the assembled audience. To show that he meant business Mr. Hall sent cheque for that amount round the following day to Miss Hartley to be held in trust by her until such time as the conditions of its being handed over to the committee were complied with. This was not for long, for the people set to work with a will and soon the scheme was fairly launched. Mr. Hall was invited to perform the opening ceremony of the new church, and in carrying out the duty handed the trustees a further cheque for £250. Then on the Sunday following the opening ceremony Mr. Hall sent another cheque for £250, thus making his donation into one of £1,000. But this was not all. The chancel window was of plain glass, and Mr. Hall thought it was not in keeping with the artistic appearance of the new church. He offered to defray the cost of putting in a stained glass window. The cost was £420, and he added to this another £80.”

At the bazaar which was subsequently held he gave £700, and in his latest effort in connection with the reduction of the debt he gave £810, making a grand total of £3,010 toward the £12,500 which. the new building has cost. He has also given half the amount required to free the Cemetery Road Church from debt, Sir W.P. Hartley supplying the other half and numerous other amounts, indeed over £1,200 in the current year. Our friend is on the sunny side of seventy, with a fine physique, fair health and with a desire to serve Christ to the close of the day. Perhaps some may criticise his benefactions, but who renders conspicuous service without coming in for a need of blame? But in the long after years the generations yet to be will bless his memory and thank God for what he did.

Samuel was born abt1836 at Ardwick, Lancashire. I have not been able to identify his parents. Can anyone point me in the right direction?

He married Sarah Hamer(b abt1834) in the summer of 1856 at Ramsbottom, Lancashire.

He married Sarah Ann Ireland (abt1833-1900) in early 1865 in the Manchester Registration District, Lancashire.

Samuel died on 5 December 1915 at Southport, Lancashire. he left an estate valued in excess of £44k.