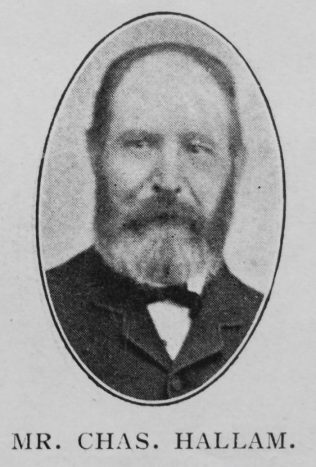 A worthy and useful life has come to a close in the passing of Mr. Charles Hallam, of the Curzon Street Church, Leicester Third Circuit, at the ripe age of seventy-six years. A village lad, he settled in Leicester shortly after his marriage, more than fifty years ago. Here his Christian course commenced, at nearly the same time. He was led, under the ministrations of a former work-fellow, to give himself fully to Christ. This took place at the Denman St. Undenominational Mission, in connection with which, for many years, he rendered good service as local preacher, Sunday School teacher and class leader.

Joining the Curzon Street Church some fifteen years ago, his name was placed upon the plan and until his strength was broken by illness, eighteen months since, he faithfully discharged his duties. His ideal was high, and he gave to it of his best; often doing his work in the later days, at not a little cost of suffering to himself. Mr. Hallam was a winsome personality. All who knew him loved him. He was a most spiritual and sympathetic listener. His stainless character, deep piety, kindly spirit, and unassuming disposition have made him widely esteemed. He was an intelligent working man, of strong liberal convictions, and remembering the hungry forties, had himself conveyed to the polling booth at the last election, to vote against the taxation of the people’s food. He brought up a large family in the fear of God, and they and their children are walking in his footsteps. Stricken by paralysis, his last illness was lingering and severe, but patiently borne. He died in great peace on August 22nd and was interred on August 25th; the service, attended by a large number of friends, being conducted by Rev. S. A. Barron, in the Curzon Street Church.

“What matters now grief’s darkest day,
When God has wiped all tears away?”

Charles was born abt1834 at Husbands Bosworth, Leicestershire, to parents Thomas Hallam and Maria Townsend.