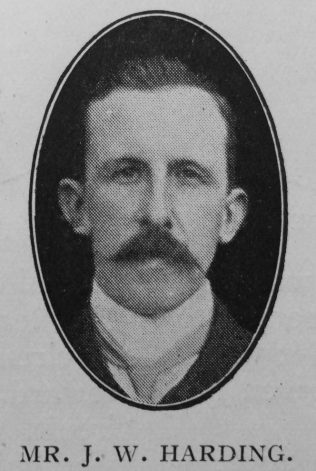 “Wherever death looks, there is silence and trembling.’’ We felt these words of Dreamthorp when we heard of the death of Mr. J.W. Harding. A few days beforehand we had taken counsel with him for various enterprises. A swift iliness, a hurried removal to the Royal Infirmary at Newcastle, an anxious day, and all was over. His friends could hardly realise that he ‘‘was not.” Even now we seem to await his coming.

He was born at Bardon Mill on May 15th, 1877,  but for twenty years he had lived with his parents at Haydon Bridge. For fifteen years he was clerk to the Permanent Way Inspector of the North Eastern Railway Company. He was known all over the line by all classes of railway employees and held in the highest esteem.

For church work he had singular gifts. He was a born leader and organiser. As secretary of the trustees he rendered valuable service. An enthusiastic temperance worker, he was an officer in both the Rechabite and Good Templar Orders.

He was interred at All Hallows Churchyard, Henshaw, June 16th, 1910, amid every sign of grief and affection. For his parents and his betrothed the deepest sympathy is felt. Many remembered his brothers in Canada, who little dreamt that they would see his face no more.

He was but 33 years of age, and yet he had crowded a life of service into them. God had some work for him in the Heavenly places and we bow to the Will divine. There are many in Heaven whom he would know. Best of all, Jesus is there. So we work and wait, till, by-and-by, we shall be all together again. God is making up the household on the other side. When the circle is complete we shall know the perfect bliss.

John was born on 15 May 1877 at Bardon Mill, Northumberland, to parents George Harding, a railway signalman (1881), and Jane Liddell. He was baptised on 27 May1877 in the Wesleyan Hexham Circuit.

John died in June 1910 at Newcastle upon Tyne, Northumberland.