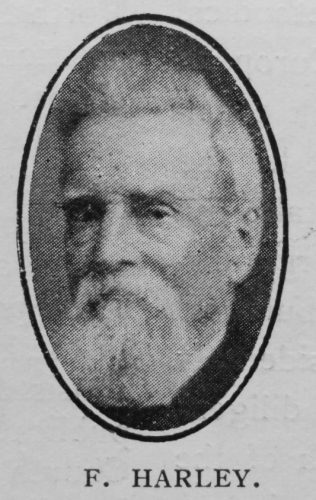 Francis Harley exchanged mortality for life on February 25th, 1912, at Shifnal, at the age of seventy-two. Converted when about nineteen years of age, he at once joined our Church at Walford and soon became a Local Preacher.

He was married in 1869 to Miss Hoare, of Worcester, who proved a worthy helpmeet, and sorely did he and their two daughters feel her decease some years ago. For many years most of the offices in our Walford Church were filled by him before his removal to Shifnal. His services as a Local Preacher were always acceptable, and he faithfully took his full share of work. Several times he was delegate to District Meeting and Conference. He was a prominent member of the Manchester Unity of Oddfellows.

On removing to Shifnal he regularly attended the Class Meeting until his health failed, and a Sabbath School was started, of which he became the Superintendent. His last illness was long and painful, but he enjoyed the consolations of the gospel. The funeral at Leintwardine, on Feb. 29th, was conducted by Revs. A.B. Poole, C.E. Mortimer and Mr. B. Hughes. A memorial service was held on the Sunday evening following at Shifnal, conducted by Mr. B. Hughes, of Rugeley.

Rev. G.H. Birch, superintendent minister, has written to the family saying that the Quarterly Meeting of the Oakengates and Wellington Circuit wish to express their deep sympathy. Mr. Francis Harley “was a Local Preacher of great acceptance in our pulpits and the Circuit generally, but especially the Church at Shifnal, is much the poorer by his removal. He was a good man, of kindly and genial disposition, and a loyal Primitive Methodist. His patient, joyous, and hopeful life was an inspiration to many. The saintliness of his character and his resignation were proof that his religion was a reality.”