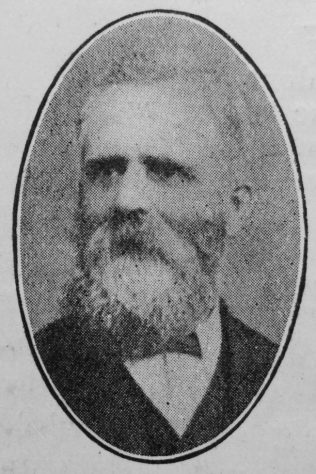 A native of Fakenham, Norfolk, Mr. William Harper early in life joined the Primitive Methodists of that town, and in many ways rendered useful service. At the age of eighteen he removed to Beccles where our cause was very feeble, the services being held in a small room in Peddar’s Lane. He soon found our people and united with them. He at once started a Sunday School and soon gathered in a large number of children. In this branch of Christian work he was most successful, being the active Superintendent for more than thirty years. Soon he became Local Preacher, Class Leader and Society Steward; and when Beccles became the head of a Circuit he was the first Circuit Steward. It was chiefly owing to the energy of our brother that in 1872 a new chapel was built and a few years later a schoolroom added. Mr. Harper used every means to keep the new pulpit well supplied, and the preachers always found a hearty welcome at his home.

For about five years before his death he was confined to his room, but was very patient, no murmur escaping him, and on January 28th, 1908, he passed away, aged sixty-six years. The funeral took place, February 1st, the first part of the service being conducted in our own church by Rev. S. Willetts, Minister. The Free Churches of the neighbourhood were all represented. Revs. F.C. France, J. B. Biggs, G. Grimson, and the Mayor of Lowestoft attended as representatives of the Norwich District. The lessons were read by Revs. J. Biggs and W. Heather, M.A. (Congregational), and Rev. F.C. France gave the address. Prayer was offered by Ald. Adams, J.P. The committal service was read by Rev. S. Willetts. A widow and five daughters are left to mourn their loss. We pray that they may be graciously sustained until they have the joy of meeting before the throne.

William was born in early 1841 at Fakenham, Norfolk, to parents John, a gardener, and Lydia.